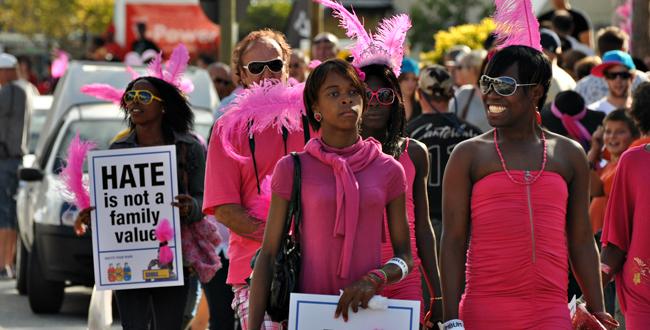 In his famous 1996 speech delivered on the occasion of the passing of the new Constitution of South Africa in Cape Town, Thabo Mbeki, then the countryâ€™s vice-president declared: â€œI know that none dare challenge me when I say – I am an African!â€ If some on the continent had their way, however, then it appears that someone could take him up on that.

Last week, Nigerian President Goodluck Jonathan signed into law a bill that outlawed gay marriage, public displays of same-sex relationships, and belonging to gay groups. In doing so, he joined a wave of officially sanctioned homophobia that is sweeping the continent. From Angola to Zimbabwe, persecution of gays is on the rise fueled by fundamentalist preachers, intolerant governments and homophobic politicians.

The war on gay rights is waged on the battleground of culture and identity. Its most committed troops regularly declare that theirs is a fight to defend African values from the encroachment of Western attitudes. â€œIt is un-African because it is inconsistent with African values,â€ declared Ugandan MP David Bahati, who in 2009 introduced legislation to make homosexuality a capital crime. As reported in the Washington Post, Nsaba Butoro, the countryâ€™s minister for ethics and integrity said: “You are talking about a clash of cultures. The question is: Which culture is superior, the African one or the Western one?”

But the rhetoric of a culture clash masks an effort to own and define what it means to be a human being in Africa. It posits the existence of a common African Culture, a mystical commonality that supposedly underlies the traditions and practices of the thousands of communities on the continent. This is, of course, fiction. What is supposedly being defended is little more than a figment of Victorian imagination.

The idea of descent from childishly simple and primitive people, unsoiled by the complexities of modernity and living in harmony with nature on an Edenic paradise, a by-gone society of wizened sagely old men sitting under trees spewing maxims surrounded by overly-sexualized women shaking their well-endowed butts â€“ this is not the creation of the people who inhabit the continent. In fact, the notions of common ancestry and common fates were forged far away from the continentâ€™s shores, in the capitals and classrooms of Europe and America.

This invention has been employed by colonial and post-colonial tyrants across the continent to insist that their subjects are uninterested in concepts of knowledge, truth, justice and human rights, that they need to be protected from the horrors of the female brain and body, and the decadence of love, romance, sex, joy, imagination and fun. After all, the African was created to work, to obey, to conform, to donate his labour and resources for the benefit of his betters.

African Culture is an imposition created to define and therefore dehumanize and enslave the continent, to deny its inhabitants their history and their agency. Thus the historical fact that homosexuality was practiced and tolerated in many traditional African societies is wished away. Particularly revealing in this regard is the practice of justifying strictures against gays by appeals, not to traditional religion or practice, but to Christianity and Islam and the invented â€œculturesâ€ of artificial nation-states, is particularly telling. African Culture is articulated from the pulpits of foreign faiths. (Archbishop Desmond Tutu once joked: â€œWhen the missionaries came to Africa they had the Bible and we had the land. They said â€˜Let us pray.â€™ We closed our eyes. When we opened them, we had the Bible and they had the land.â€)

According to Africa Report, the United Nations has warned that Nigeriaâ€™s legislation undermines, not just gaysâ€™ safety, but also their humanity. They, and others across the continent who refuse to conform to the dictates of African Culture â€“including human rights workers and pro-democracy activists- are marked as un-African, stripped of their humanity, beaten, jailed, tortured, exiled or murdered without too much fuss.

Their real crime is they dare to challenge the right of a small but powerful elite to define what an African is and in doing so pose a direct threat to the systems of control and privilege that have been built around that right. The refusal to be defined, to be silenced or hidden away, is terrifyingly subversive as it opens up new horizons and new avenues to self-knowledge and, ultimately, generates new centres of power.

As people, especially the youth, on the continent â€“buoyed by rising incomes and the revolution in communications technology- become increasingly impatient with the one-size-fits-all constriction of humanity, it will become more difficult for the governing elites to continue to exploit the trope of African culture to keep their populations in check. Already, on the internet and in other forums, one can see feminists and gay and governance activists challenging the conceptions that underlie it. Through these conversations, Africans are reimagining themselves in new, refreshing and empowering ways, and creating spaces for authentic cultural expression.