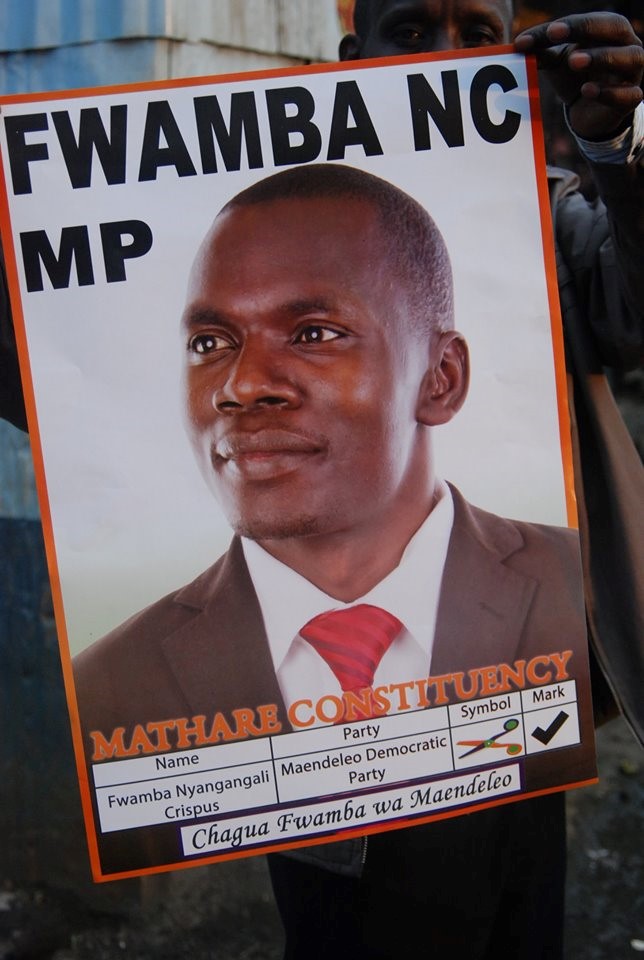 The IEBC has cleared 8 candidates to run for the Mathare by â€“election, with Gor Semelango, the former Chair of the Youth Enterprise Fund who was fired due to gross incompetence, with initial opinion polls indicating that the TNA candidate and the CORD candidate are now neck and neck. But there are some new mix of candidates who are emerging who may well prove to be the real deal, in this ensuing contest.

One particular scenario is the entry into the race by a former University of Nairobi Student leader and leader of the Kenya Young Voters Alliance (KYVA) Mr. Fwamba Nc Fwamba, the Maendeleo Party candidate, who has particularly excited the Mathare residents. Reports reaching us suggest that he has so far secured significant support from some of the main sector leaders in the area, including the local leaders, youths and women, especially the locals who are determined to ensure â€˜one of their own â€˜ wins the seat.

But there is another potent weapon, that may well give Fwamba the Mathare seat, the ethnic arithmetic on the ground, and the growing determination by the locals to elect a person from a non-Kikuyu community. The neck to neck battle between Wanjohi, the TNA candidate and Kariuki from CORD has rendered this populous Kikuyu ethnic group virtually irrelevant, and now the new swing vote is a combination of the Luhya, Luo and the Kamba blocks. These groups will greatly determine who the eventual real winner in this election is going to be.

And there are many reasons why these two candidates will find it rough to win over the seats from the western axis, and they play out at the national level. The more the Jubilee Government goes for the jugular of the undisputable Baba of Kenya, Raila Amolo Odinga, and by extension in Mathare, the more this Luo Luhya and Kamba block of voters who would have been mobilised to support the CORD candidate en masse, detest the candidate being forced down their throats.

On Sunday, Mr. Fwamba was joined by a strong delegation which was led by among others Vihiga ODM Chairman Kennedy Butiko, Hon. Martin Andati, the Secretary General of Maendeleo Party, and former Nairobi Councillor Mr. Mutunga Mutungi.

â€˜The locals have also mobilized themselves in cells, and are planning to enhance voter turnout on the voting day, to ensure that we carry the dayâ€™, declared Fwamba when speaking on phone to this writer.
The final voting day is 7th August, and the ensuing battle is worth the wait!
By Gilbert Karani