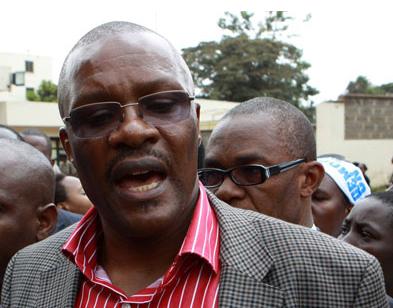 Eliud Owalo this morning confronted the former Chairman of the Truth Justice and Reconciliation Commission, Amb. Bethuel Kiplangat when he sought to know when the report would be implemented.

The two met at the Serena poolside cafeteria on Saturday morning, and no sooner had they exchanged pleasantries, Owalo took him to task about the delay in implementation of the TJRC report.

Amb. Kiplangat told Owalo that they had been informed by the Office of the President that the government would implement the report and that they were reportedly searching for individuals to spearhead the implementation.

Owalo told Kiplangat that the government lacked the political will to implement the report and that the people would force the implementation of tue report. For example, Owalo wondered, what investigations were needed to determine that the Kenyatta family grabbed community land in Taita Taveta County.

Kiplagat was at pains to explain how his name got into the Ndung’u land report and the mysterious death of the former minister of Foreign Affairs Dr. Robert Ouko.