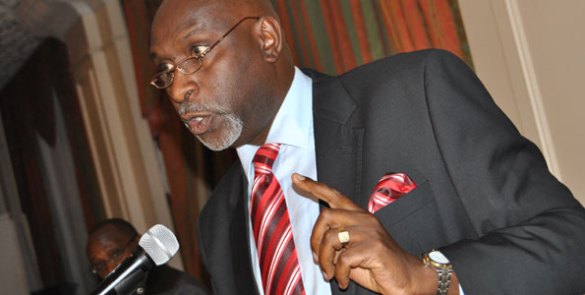 This is the second by election in Kisii County where the name of CIC Chairman Charles Nyachae has been mentioned as the invincible hand behind the success of Ford People candidates. In the just concluded Bonchari by election in which Hon Opore won, Charles is rumoured to have played a strategic role.

Such are the rumours that have angered Charles, he has now threatened to sue a woman, a nominated senator one Janet Ongera. Charles knows very well that Kisii ladies like talking, and talking they do, often it is called gossip, Kisii men are known to dismiss gossip, so I don’t understand what Charles is trying to prove with his threats!

Somebody tell Charles that ladies will always gossip, so he should withdraw his much publicized letter threatening Janet with civil suit ! JUST SAYING!

Here below is the letter from Charles to a Kisii woman, a senator, a single woman!

On the KTN Prime Time news of Sunday 22nd June, 2014, you stated that you saw me campaigning for a particular candidate in Bonchari. You are further quoted in the Daily Nation of June 23rd, 2014 entitled â€œNyachae backing Rival, claims ODMâ€ as claiming that I openly campaigned for FORD PEOPLE candidate Zebedeo Oporeâ€.

You made these remarks to the media at Bonchari on Sunday 22nd June 2014. When we met at Gesero Catholic Church on the same day, and I asked you what it was about, you said to me that â€œit was just politicsâ€. You also sent my Member of Parliament Hon. Richard Tongi to me to tell me that â€œit is not personal, it is just politics.â€

Whatever your reasons for making the false allegations and irrespective of at whose behest you were doing so, the same were, and are blatant falsehoods. What is more, you made the allegations knowing them to be false. Whatever the â€œpoliticsâ€ you refer to, what is clear is that these false utterances were malicious and calculated to embarrass me and injure my reputation.

I am by copy of this letter instructing my advocates to initiate such action as is appropriate to protect my interests.