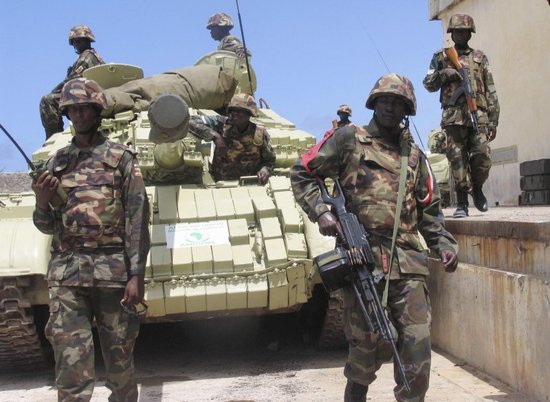 The Al Shabaab Militants have posted on twitter graphic pictures of five Kenyan troops killed yesterday morning in the battle for Miido, a town close to the port city of Kismayu.

In a tweet this morning Maj. Emmanuel Chirchir confirmed the missing soldiers have been found.

There was no confirmation of whether the three soldiers found were dead or alive, lending credence to the photos posted by Al Shabaab could be genuine. If confirmed, it will be highest loss to KDF in a single operation yet.

â€KDF corpses are now left for the dogs to devour. Welcome to Kismayu fellas,â€™â€™ Al Shabaab mocked KDF/AMISOM, in a Twitter post.

The posted picture showed what appeared to be the bodies of Kenyan soldiers in uniform lying in an open dusty ground and had signs of having been dragged on the ground.

Meanwhile KDF have appealed to residents of Kismayu to give them information on where militants would bury the bodies of the killed soldiers.

â€To the people of Kismayuâ€¦be on the lookout where the remains of our heroes will be buried. That will be our welcome gesture,â€ said Chirchir in a twitter posting.

Two of the bodies paraded had military identity cards of the soldiers, bank pin pass, Kenyan brand of cigarettes and a one thousand shilling Kenya currency note.
The bodies of the Kenyan soldiers killed in Miido town were taken to Kismayu by the Al Shabaab militia where they were publicly paraded for the residents in what many interpreted as a move by Al Shaabab to strengthen the resolve of their fighters and seek to assure residents that they had capacity to ward off KDF/AMISOM

Last Monday AMISON troops seized the port of Marka, from Al Shabaab as part of grand match to Kismayu. AMISOM said its fighters met little resistance in the battle for Marka, which is about 68 miles south of Mogadishu. Â According to the United Nations,the Al Shabab earned income from taxes and port fees in Marka, hence a key strategic loss to the militia.

The capture of Miido town is a testimony that Kismayu is calling and could be just a matter of hours before AMISON storms the port city.

The success of KDF and AMISON in driving away the militia from the capital Mogadishu and 15 other towns has driven the Jihadists to Kismayu, the concentration of Al Shabaab in Kismayu makes the battle for Mogadisgu a grand royale .

Al Shabaab claims to have saved the best for last as battle for Kismayu inches closer, the limited resources at their disposal will be put to maximum use; this may include even using human shield experts warned.

In 2011, according to the head of the U.N.â€™s counter-piracy division, Colonel John Steed, Al-Shabaab increasingly sought to cooperate with other criminal organizations and pirate gangs in the face of dwindling funds and resources

Al Shabaab is an off-shoot of the Islamic Courts Union (ICU), which splintered into several smaller factions after its defeat in 2006 by the Somali Transitional Federal Government (TFG) and the TFGâ€™s Ethiopian military allies