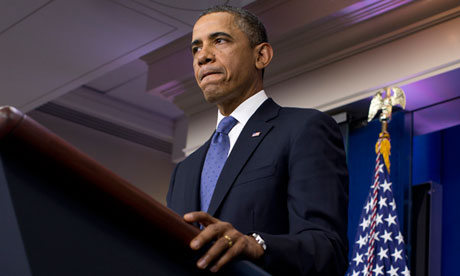 President Barack Obama pauses during a statement on the fiscal cliff negotiations at the White House on Friday. Photograph: Evan Vucci/AP

America is entering its final day to avert the fiscal cliff, after talks between Senate leaders in Washington broke up with no deal in sight.

Harry Reid, the Democratic Senate majority leader, and Mitch McConnell, who heads the chamber’s Republican minority, ended more than a day of on-off talks on Capitol Hill on Sunday without an agreement and with nothing for lawmakers to vote on. It brings closer the prospect that America could plunge off the so-called fiscal cliff at midnight on Monday, triggering swingeing spending cuts and across-the-board tax increases.

Talks are expected to resume but with the clock ticking inexorably towards the new year deadline, few in Washington were optimistic about a deal.

McConnell said no single issue remained an “impossible sticking point” and blamed Democrats for not responding to a Republican offer made on Saturday evening.

He called vice-president Joe Biden, with whom he has worked before, to try to “jump start” negotiations. “I’m still willing to get this done but I need a dance partner.”

Reid said the Republicans had a made a good-faith proposal but that the two sides remained apart on some “pretty big issues” and the Democrats could not respond.

“We’ve been negotiating now for 36 hours or thereabouts. We’ve been trying â€¦ but at this stage we’re not able to make a counter-offer.”

Republican senators withdrew a demand over a new way of calculating inflation that would have cut social security and other social programmes, but the concession failed to bridge the gap between the two sides.

The deadlock cast gloom over the US just hours after Barack Obama tried to inject hope with a final pitch to Congress to act on the fiscal cliff.

In a rare foray on to the weekly round of political talk shows, the president sought to put the blame for the looming economic crisis firmly at the door of the Republican party, accusing his opponents of having “trouble saying yes” to any proposal put before them.

The pointed remarks came as lawmakers in Washington prepared for a rare Sunday session, which convened only to break up hours later with no vote.

Congress has until midnight on Monday to find a solution to the current fiasco. That deadline will automatically trigger a series of fiscal measures that experts have said could plunge the US back into a recession

If no deal is done, 88% of Americans will see their taxes rise on 1 January, a wave of deep spending cuts will start to take effect, and 2 million long-term unemployed people will lose their benefits.

The task of reaching a compromise had fallen on Reid and McConnell. Both men were summoned to the White House on Friday, alongside House speaker John Boehner and minority leader Nancy Pelosi. Treasury secretary Timothy Geithner was also in attendance.

After that meeting, Obama said he remained “modestly optimistic” that a deal could be achieved.

But since then there has been no firm indication that a grand compromise was indeed obtainable.

“I was modestly optimistic yesterday, but we don’t yet see an agreement. And now the pressure’s on Congress to produce,” Obama told NBC’s Meet the Press on Sunday, ahead of news that the talks had indeed broken down.

Boehner responded saying Americans elected the president to lead, not cast blame. “The president’s comments today are ironic, as a recurring theme of our negotiations was his unwillingness to agree to anything that would require him to stand up to his own party,” Boehner said. “We’ve been reasonable and responsible. The president is the one who has never been able to get to ‘yes’.”

Reid and McConnell had been tasked with coming up with a solution by 3pm Sunday. But little more than an hour until that deadline, both men took to the Senate floor to announce that both side’s position remained far apart.

The main sticking point has been the threshold for raising income taxes on households with upper-level earnings.

Obama wants all earners of $250,000 a year and above to shoulder a greater tax burden. Analysts believe that any deal could be anchored on raising taxes for households earning more than $400,000 or $500,000 a year.

But many Republicans in the House have indicated that they will vote against any increase in tax.

Not only could this scupper the chances of a grand deal, it could also see the blocking of the White House’s back-up plan to avert the fiscal cliff.

Obama has indicated that if Reid and McConnell fail to produce an agreement by the end of Sunday, he will strong-arm Congress into a vote on scaled-back measures that would avert the immediate cost of America heading over the fiscal cliff.

That simple “up-or-down vote on a basic package” would stop tax hikes for middle-income Americans, while “laying the groundwork for future progress on more economic growth and deficit reduction”, Obama said on Saturday.

But even that may have difficulty passing through the House, given the entrenched position of some Tea Party-backed Republicans.

Obama appeared to prepare for that eventuality on Sunday.

But he warned that missing the deadline would still result in “adverse reaction in the markets” and would “hurt our economy badly”.