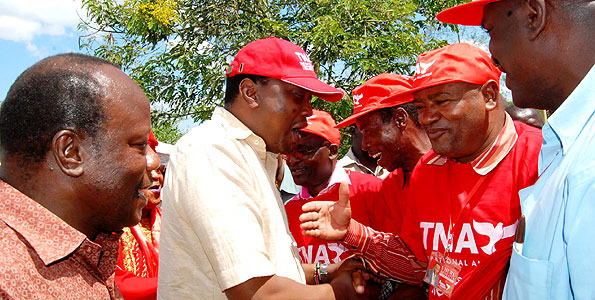 The public stripping of women in Nairobi is as a result of idleness by youths of Â allegedly those allied to The National Alliance (TNA) party of President Uhuru Kenyatta who are increasingly detouring into abject poverty as the country’s economy faces near collapse.

Life for a majority of youths under the jubilee government is a constant daily struggle. With an almost dead private sector, a bigger chunk of educated youths (form four leavers and graduates alike) are ending up in the informal sector, bloating the available opportunities and pushing the uneducated even further into economic neglect.

This scenario has seen dispossessed youths turning into all manner of violence to remain afloat. Drug and alcohol use is in the increase so are acts of sexual violence – stripping women naked being the current ‘frenzy’.

All these acts, especially in Nairobi and its environs, can be traced to TNA youths most of whom work as matatu touts and casuals in the Nairobi matatu sector dominated by a single community.

In Kitengela, for instance, these youths, wearing TNA t-shirts and caps, descended on a woman whom they accused of scantily dressing and ripped her off, exposing her nudity to the public. It did not take long before they again descended on another woman, this time in Nairobi City.

Clearly, most of the youths captured on local TV are mostly members of an a sect that is notorious for macabre atrocities on women.

Most Nairobians murmur it in hushed tones but the dread of re-emergent of violent groups like Mungiki is real. So confident is the new terror group that they have started distributing leaflets warning members of other communities to leave their ‘lands’, within the city. You wonder just how much land belongs to these group.

In several low income estates in Nairobi, Mungiki, Taliban, Jeshi la Mzee etc are regrouping in various forms, buoyed by the collapse of government security apparatus, and, sadly, a political wing in government obsessed with ‘militarizing’ its support base ahead of the 2017 elections.