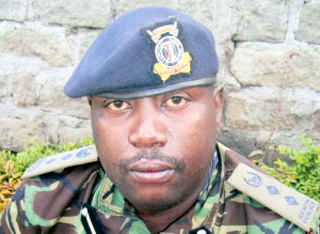 The now famous fake Assistant Commissioner of Police wants to meet Prime Minister Raila Odinga. Mr Waiganjo told NTVâ€™s Larry Madowo that he was in possession of a dossier that he can only share with the prime minister and vice president.
The Waiganjo dossier is likely to implicate top security officers and a leading politician. It has been alleged elsewhere that he was â€plantedâ€ in Rift Valley – the ground zero of the 2007/2008 post election violence to interfere with investigations and collection of evidence by the ICC.
Speculation on social media is that Waiganjo was part of the team tasked to implicate William Ruto in the ICC case, â€œhe is now being dispensed because Ruto agreed to play ballâ€, one of the many theories advanced on social media reads.
Mr Waiganjo has claimed his life is in danger. He alleges that top police officers are out to eliminate him and that is why they have lined up a series of false charges to intimidate him, he maintained he was not a criminal and that he was appointed by the retired Commissioner of police Mathew Iteere.

He insisted that he spoke with Iteere on several occasions as his commissioner and wondered why Iteere was disowning him.
Here is the full interview: