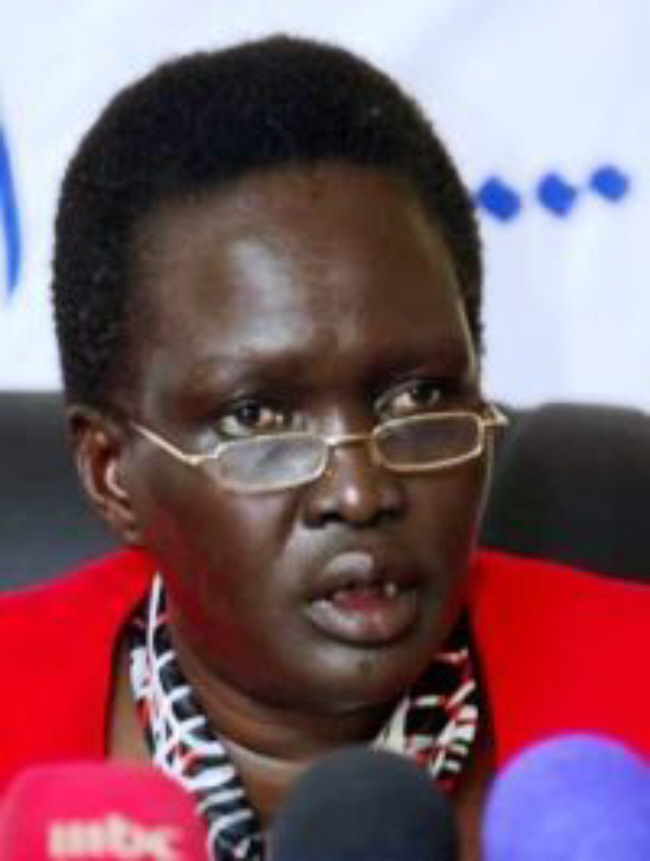 In an exclusive interview, Madam Rebecca Nyandeng Garang de Mabior has told The London Evening Post how the current crisis in South Sudan that has claimed an estimated 10,000 people and left many injured and homeless started and who took the first shots that led to the total destruction of Dr Riek Macharâ€™s house and the killing of his brother and 34 Nuer soldiers who were guarding his house. Because of the importance of this story, we have decided to post it verbatim as Mrs Garang has told it to our editor Dr Henry Gombya.

Henry Gombya (The London Evening Post): â€” Thank you very much for agreeing to have an interview with us. My first question is, we would like you to tell our readers what you know is going on between President Salva Kiir and former Vice President Dr Riek Machar.

Rebecca Garang: Thank you for having me. You know what happened in South Sudan is something that is really bad and taking back the peoples of southern Sudan to war. This was something that happened on the 15th of last month but it had started earlier with some issues which were not being talked about in the party; democracy was not in the party. So some of our members were saying that we needed to reform the party documents and in the party too because there was no freedom of speech, and no freedom of press; a lot of things.

On the 6th of December we said OK then if the President is not calling for a dialogue, letâ€™s call a press conference so that our people know what has been happening. So we gave a press conference on the 6th, all of us together â€“ Riek, the deputy chairman, Salva Kiir and at the same time we were the ones who wanted the reforms together with the groups who are arrested now.

RG: Yes it is us the members, including Dr Riek, who wanted reforms and those who were arrested, . [In] the SPLM we were saying that there were things that were not going well. When you use the tools of democracy like a press conference or a rally to prevent it, there are a lot of intimidations. So we said this needed to be corrected because when we started the war, we were a democratic movement even though there were some external problems here and there. But we can say that we were better because we were fighting for the freedom of our people

Now when it came to the government of South Sudan, it didnâ€™t like that and thatâ€™s why we spoke out. We conducted a press conference raising some issues which were very important. Then then Chairman [of the SPLM] and President, Salva Kiir did not like two of those issues. One was when we asked about the debt of US$4.5billion that needed to be repaid. We as leaders of the party and some of us government officials, we wanted to know what happened, where we got this US$4.5 billion debt. What did we do with it? And there were no national projects which had been carried out so that we could know about the national projects ongoing and the salaries. This is the questions we raised. The second question he did not like also was [about] the army. He [President Kiir] was training a parallel army of 15,000 soldiers which he called â€œthe Republican Guardâ€. We raised that question. Why train a parallel army when the national army was there? If he wanted to train people he could have taken a quarter from the national army. We raised the question of 15,000 being trained. Why is that?

In the evening somebody came to me and said the president wanted to see me, Madam Rebecca, at 9 Oâ€™clock on the 11th and then the group on the 14th [of December]. Then we said OK, maybe the president has accepted what we have proposed; very good gesture. But on the 14th in the morning he didnâ€™t call up. Then I was called from the meeting place and people had already gathered. [They asked me] are you not coming? Then I told them Oh! I was expecting that the president was going to see us. They said â€˜noâ€™. People have gathered and the president is coming in 30 minutes. So all of us went in the meeting.

And when we went to the meeting, two Archbishops; the [Catholic] archbishop and the Archbishop of the ECS (Episcopal Church of Sudan) [Daniel Deng] and all other bishops were in the meeting. So the [Catholic] Archbishop, Archbishop [Paulino] Lukudu [Loro] was given a chance to say the prayers and he gave a very good speech, urging us to dialogue and urging us not to interrupt Christmas, saying that Christians should be allowed to pray well and dialogue. Then came Madam Hilde Johnson, a representative of the UN Secretary General who also took the same line as Archbishop Lukudu.

But when it came to the turn of our chairman, Comrade Salva [Kiir], he just dropped a bombshell of [insults]saying he would not allow 1991 to pass and that if Dr Riek wanted to do anything, he was ready for that and that he was not a betrayer, something like that. It was a very provocative speech which was divisive. Some of us, especially myself, were shocked because I thought that the president, as a leader of our people, would be speaking in the same voice as the people of God were speaking. That was a very bad speech and I think it was the start of all the problems.

In the afternoon session they (the Salva Kiir group) decided that some of us would not be given a chance to talk. The president remarked that he had come here to pass a document. He did not even say we would discuss it which is the SPLM constitution. So the document was passed with all the things that we were supposed to amend and add some other issues because now that we were in a bigger house. The president refused some of us [to speak] saying we should not participate [in any further discussions].

On the [following] Sunday, I didnâ€™t go to the meeting. I went to church and from there I returned to my house. Dr Riek called me in the afternoon and said â€˜did you go to the meeting?â€™ and I told him no, I didnâ€™t go. Then he told me that some of our members were feeling this and feeling that and were saying that they did not want to go to the meeting because yesterday we had been refused to talk, not to participate. I think this is when they made a decision that they would do what they did. They may have thought that these people did not come to the meeting and so they were maybe planning a coup. So they made a decision that these people would be arrested. Some of them said they would try to make something so they could accuse these people of planning a coup and arrest them. This is what happened.

This thing happened in his [Kiirâ€™s] headquarters. When they went there, they wanted to disarm a group of Nuer. They went and found that in the presidentâ€™s headquarters they were many [soldiers belonging to the] Nuer. Their commander then went to the chief of the general staff and asked what he could do. He was then told to leave the [Nuer] soldiers until the next morning. But the officer did not listen to his orders and proceeded to try and disarm the Nuer soldiers. This was the time when this thing erupted and war begun in the headquarters of the president. Then at one oâ€™clock at night, that is when the army headquarters started shooting because there were Nuer members there. Because they were watching the speech of the president, they knew there was a problem.

So some of them [the Nuer soldiers] went home to Dr Riekâ€™s house to get him out because if he had been in his house, he would have been killed. If you went to Juba now you could see the way his house was destroyed and it is not his private house, it is a government house. It was destroyed by Tiger, Kiirâ€™s army. And then the soldiers who were in Dr Riekâ€™s house, about 34 of them, were all killed, were murdered. The Chief of the General Service had told some people to disarm them [the Nuer soldiers] after telling them he was saving their lives by disarming them. These people (Kiirâ€™s Tiger troops) came and killed all of them. His [Macharâ€™s] office manager who was his brother, was also tracked down at a hotel and killed. So when they came in, they targeted massacring Nuer members. A lot of officials, administrators in Juba were killed. This is what literally happened.

This interview will continue in tomorrowâ€™s issue when Madam Rebecca Garang tells the world what happened when the Ugandan forces entered Bor. Do not miss it.