enator Muthama of Machakos County was this morning hurt after a brawl broke out in parliament. Hon Muthama had joined Kakamega senator Dr Bonny Khalwale and Siaya senator James Orengo at the parliament’s speaker’s gallery to witness the motion on the controversial security bill.

Later it was confirmed that four Cord MPs shirts were torn by their Jubilee counterparts. Muthama, Mbadi, Khalwale and Wetangula in the midst of the scuffle with Sakuda and Kimani Ngunjiri leading Jubilee side.

It was also reported on twitter that Hon. Kimani Ngunjiri bit the fingers of Hon. Simba Arati. 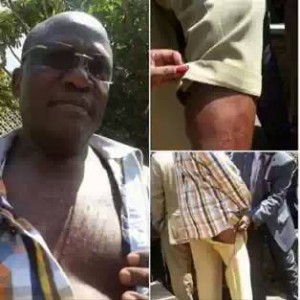