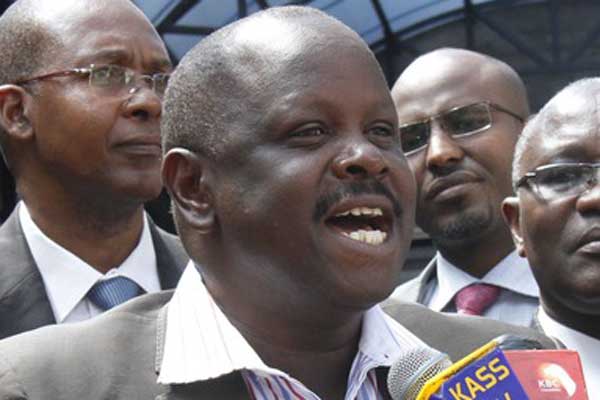 Kenya Today has reliably learnt that Bomet Governor, who also doubles as the Chairman of Council of Governors, Isaac Rutto has secretly mobilized a significant number of governors and put them on a flight to Mombasa tonight and tomorrow morning to Mombasa for a clandestine meeting with Jubilee leaders at the exclusive Continental Resort starting tomorrow.

The agenda of the meeting is national dialogue, a subject which Jubilee Government has publicly FRIENDS AGAIN: William Ruto and Isaac Rutto when the former hosted them at his Karen home

The meeting comes hot on the heels of a thawing of relations between Isaac Rutto and his party leader William Ruto. It is widely believed that Governor Isaac Rutto was compromised and well compensated by the Jubilee leadership to help in scuttling the push for national dialogue by the opposition CORD through the Council of Governors.

Last week, Governor Rutto surprised observers when he was reported to have urged CORD leaders to stop their consultative rallies and any plans of mass action. This was coming from a man who won over governors and got re-elected to office by virtue of his defence of devolution which interestingly forms part of CORD’s agenda for the push of national dialogue. His then deputy Nairobi Governor Evans Kidero did not even get a proposer during the closely watched elections.

It therefore a shock to political observers that Governor Ruto has, without the prior knowledge and approval of the Governors, arranged for President Uhuru to meet the Governors in Mombasa with a view to further compromising them and ultimately persuading them to distance themselves from the CORD initiative for national dialogue. It is reminiscent of gone days when government used to sponsor MPs to attend all expenses plus allowances paid luxury retreats so that they may support unpopular bills in parliament.

As bait, the Jubilee government will give formal backing and financial motivation to broke governors to form a parallel team of among themselves to initiate national dialogue with the the Jubilee Government. Such is the challenge that devolution faces in Kenya.

CORD officials have this afternoon been thrown into a spin and are reaching its Governors to approach such missions with caution. CORD is reportedly disassociating itself in advance from any resolutions that are likely to be reached at this discreet meeting that does not include stakeholders in Kenyan society and has no express mandate of the people.

Some governors who secretly work with the Bomet Governors are said to be in dilemma as they fear to face the wrath of the MCA’s and the voting population if they get into such talks since polls reveal majority of Kenyans are in support of CORD’s drive for national dialogue.