He is also said to have lost 3 million in the just concluded shame selection where the 4th best candidate Moses Kajwang was awarded the certificate on the ground that he was a brother to the late senator Gerald Otieno Kajwang.

Here is the nomination certificate that Rabongo will use as a special purpose vehicle for the Feb 12th 2014 elections. 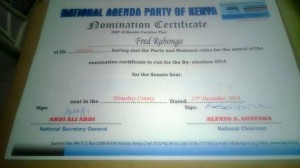