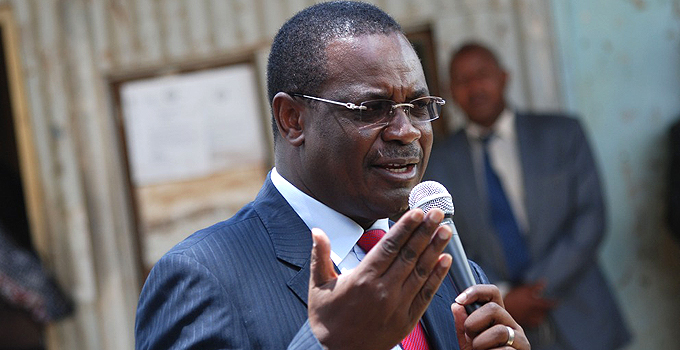 Nairobi Governor Dr. Evans Kidero has differed with President Uhuru over how to run the Matatu sector in Nairobi.

Today, President Uhuru witnessed the launch of a cashless payment system at KICC in a ceremony which governor Kidero snubbed.

But like the wifi programme in vehicles, which has since flopped, it is a wait and see how the cashless project will be. It is however worth noting that Safaricom seems to be a major driver in this initiative and has ‘pocketed’ State house, especially the wing which believes in everything digital.

Sources privy to the friction between the two hitherto political friends and partners have told this writer that Governor Kidero supports a total overhaul of the public transport sector with modern buses and mass transit trains.

However, Uhuru is said to be uncomfortable with this new arrangement as it will bring on board new players as well as lock out of major roads certain bus companies associated with powerful political families in Kenya, many who are his personal friends. Most of these buses are old and rickety, but have remained on the roads purely because of the protection by the executive.

So incensed was Kidero that he left the CBD for unknown destination. Uhuru then rode in a public bus from state house, accompanied by safaricom CEO Bob Collymore.

Restoring sanity in the Matatu industry died with John Michuki, former transport minister. Hon. Michuki had banned graffiti, which today President Uhuru shockingly lifted, alongside, it is said, the wearing of uniform by drivers and conductors. Also lifted is the phasing out of 14 seater buses which are the main cause of Nairobi traffic gridlock.

Kidero, ever gullible, may not have known the intricate politics of Matatu sector in Nairobi which is controlled wholly by a group of influential kikuyu businessmen and who are said to have participated in a big way in thrusting Uhuru to power. President Uhuru received the backing of the Nairobi matatu sector especially the touts and drivers who have all along been opposed to phasing out cash payments.

Kidero’s mass transit project may not see the light of day, just as the prospects of him returning to city hall, having proven very difficult to deal with as the former corporate sector manager has dried out several gravy trains and corruption outlets which thrived in the defunct Nairobi city council.

Though accused of creating his own corruption networks, with sources claiming that he receives at least 2 million a week, Gov. kidero has been hugely successful in restoring and rehabilitating several sectors of the city’s social services. To his credit, and waterloo, Kidero cleaned city payroll, rendering thousands of ghosts workers, jobless and moneyless.

Here is what President Uhuru had to say:

Today I attended the Matatu Owners Association National Delegates Council Meeting and official launch of the cashless payment system for Public Service Vehicles at KICC. The public service transport sector is key in delivering our national socioeconomic development and a major contributor to our GDP. The sector is also critical to the development of all other sectors of the economy since it provides a means for people and goods to move across our country and region. This sector is too important to be left to adhoc, uncoordinated and chaotic leadership. As the leader of a Government which believes in the magic of technology, especially modern, hi-tech, appropriate and affordable digital solutions, I am happy to note that the industry now readily embraces IT. Many SACCOs have now deployed digital tracking and fleet management systems to support business operations and prevent criminal activity. The same SACCOs are now ushering in a bold new era of cashless fare payment systems. These systems are revolutionary because it gives proper control to investors while relieving all stakeholders of the risks involved in carrying cash. The cashless fare system also ensures accountability in the public service transport industry. It brings convenience, security and accountability all at once. As this system is implemented, I urge investors to avoid loading extra costs on passengers. This is a capital investment; just as you do not increase fares when you purchase a new vehicle, the roll-out of cashless fare systems should relieve, not further burden consumers. We will intervene sternly if the industry uses this system to make life difficult for travellers. Let us also build on the gains we have scored so far and build momentum towards keeping our roads safe.

It was later alleged that statehouse operatives prompty invited Bishop margret wanjiru to fill the void left by Kidero, to the Jubilee insider Wanjiru is the heir apparent to the Kidero seat!