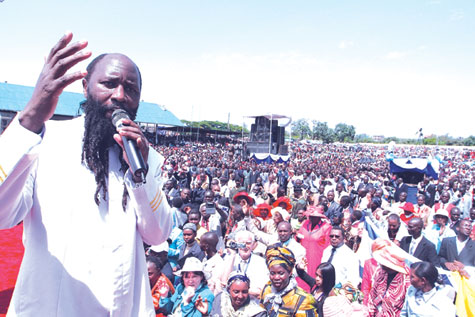 I must first confess that am not righteous before the Lord, I have tried to be one, by making My way straight ,but each time I do , a bent is realised. Sins have milked my spirituality, but not like David Owuor and his religious sycophants and loyalists to his religious propaganda , I have severally broken some of the ten paramount commandments of the Lord just as You and any other person, so am not holly.

By writing this, I know I am assuming a commandment and going against the word of God which warns us not to judge, I repent in advance!

This article is not a critique of the bible, it has nothing to do with questioning of reality but it is just part of my honest quest to re-awaken Man’s understanding of the end times as revealed in the scriptures.

Dr. David Owuor branded himself a prophet of God and claimed to be talking with God one-on-one just as the ancient prophets. He has always fooled his followers with threats of imaginary rapture presumably shown to him in a vision. This has lulled these poor souls to be submissive to Owuor’s religious propaganda and divine rumors. My take is that, Owuor is a fulfillment of the revelation as indicated in Mark 13: 20 _ 27 which says in verse 22 ‘ For false Christ and false prophets will rise and show signs and wonders to deceive, if possible even the elect.’

You might have read the Bible over and over , and if you have never come across this, then you are doomed.

To me, it translated to more than just a ‘godly direction’ but a more of a sacrifice. Failing to see my father in death can take more than just a mere presumption of an imaginary conversation with ‘god’, and this can only happen when am the one who killed him. Sticking to such post-civilization philosophy or school of spiritual bondage can amount to one description, DOOM.

Owuor knows what he is doing, who he is working for and what he gets from that work. If you are following Owuor blindly ,not knowing the deal, then you are DOOMED. The Deal here is the number 666.
Jesus practiced utmost humility, this included riding on a young donkey to show that he came for the spiritually poor. It might be a symbol, but am sure if the scriptures have not over the years been literary distorted, then this was not the best that Jesus could have afforded during a journey to his hometown, but he never wanted to show off.

Look at the affluence that David Owuor has injected to his ministry, the worldly security, motorcades, escorts name them. Tell me what relevance it has to spirituality if Owuor’s escort delays the traffic normalcy in a city for three hours? If he is a real man of God, why doesn’t he use these resources to help the desperate in society?

Jesus did more greater miracles but he never wanted this to be seen as a away of Marketing his ministry, in fact he warned the beneficiaries of such favours to keep it to themselves. A good example is when he healed a lame beggar at the gate to the temple on a Sabbath, he warned him not to tell anyone, though out of happiness and joy he ended up spreading the news.

Take Owuor as our point of study, He does his ‘miracles’ which according to me are not Godly steered but are just some tactically fix and power of ILLUMINATI in front of local and international cameras, retells it until the next one happens. He use his sycophants to spread these in a bragging way and ends up failing to credit the almighty whom he claims he is serving.

Ask yourself these questions ; Is prophecy only about disasters? Does prophecy comes after what it prophecy? Why is it a must that at least two people has to die in Owuor’s crusade?

The meaning of Owuor’s unkempt beard is more unbelievable even than his faked prophecies. It signifies ruin, meaning he has come to ruin the earth. Brothers, beware!! THESE ARE THE END TIMES.

EDITOR’S NOTE: The arguments published herein does not represent those of Kenya Today Editorial Team.