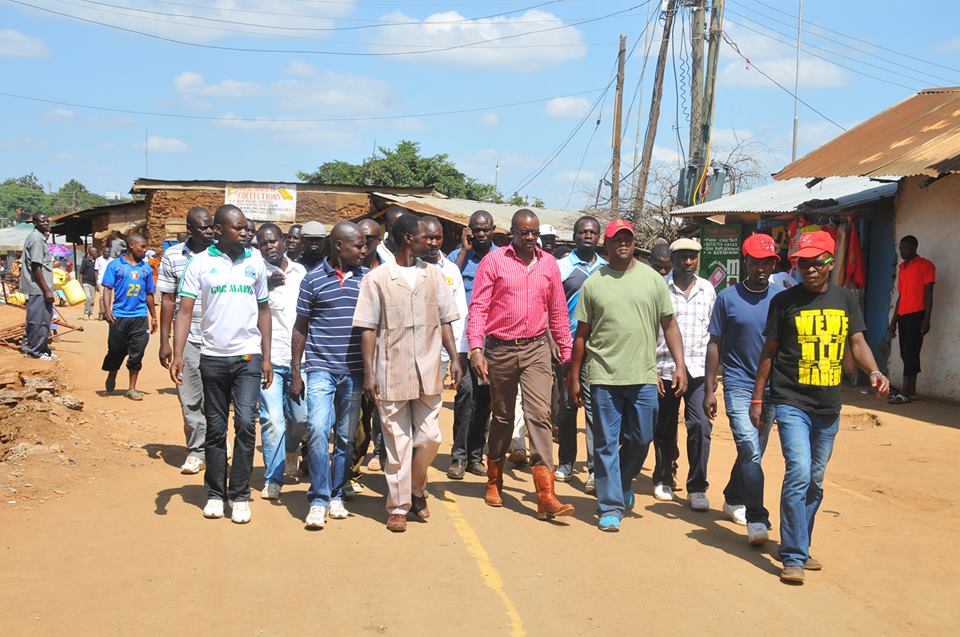 Nairobi businessman and politician Eliud Owalo has launched a foundation to assist the youths of kibra constituency acquire technical skills.

Owalo returned to Kibera today for a series of events which saw the first cohort of 31 youths get sponsorships for a fully paid course in motor vehicle driving.

He also presided over various fundraising to several churches in Kibra as well as contribute to funeral services of families who lost loved ones. The constituency has experienced fire outbreaks due to the illegal electric wiring in most parts of the slums.

Kibra constituency has experienced heightened political activity as Jubilee government continue its development rhetoric in the constituency which is centred around sewers and toilets.

Using the National Youth Service, the jubilee regime has camped in kibra, especially within Kibera slums, for several months now.

Speaking at the weekly baraza at Kamunkunji grounds earlier today, several speakers faulted the jubilee government approach to developing the slum constituency with leaders warning that what is needed is not to make the slum ‘liveable’ but to do away with the slum altogether by systematically upgrading the houses as has been going for the last ten years.

The speakers warned that government obsession with cleaning Kibera without tackling the economic and social situation of slum dwellers will fail, saying basic human needs cannot be guaranteed by merely erecting toilets all over.

“The approach is wrong in two fold. First, it doesn’t solve the basic problem facing the people of kibera which is shelter. The slum upgrade programme which Uhuru regime seem not to be keen in was to ensure people get out of the shacks into modern low cost housing units where all the amenities like toilets and bathrooms are inside the house, not these pit latrines the government is erecting everywhere. Second, and more worrying, the government seem to imply living in slums is okay so long as you have somewhere to relieve yourself, how about the other basic human needs like food and clothing, how does it want to empower the people to get these important needs of people?” explains Eliud Owalo.

Owalo, a fierce critic of the initiatives jubilee is launching in Kibra however insists he is not against development saying the government has a constitutional and moral prerogative to develop all regions of the country ‘without shooting a documentary’ to show what it is doing.

During Jamhuri, the government aired a documentary to show off its development programmes in Kibera. However, it seems residents of Kibera have been deeply offended by what many see as an attempt by the government to gain mileage from its activities in Kibera.

“When you see they are doing all these PR then it means they are doing something they ought not to ordinarily do. In kibra, what they are doing is the lowest any government can do and feel comfortable – erecting pit latrines. Who among those leaders in government uses pit toilets several meters away from their own houses?” Owalo concures.