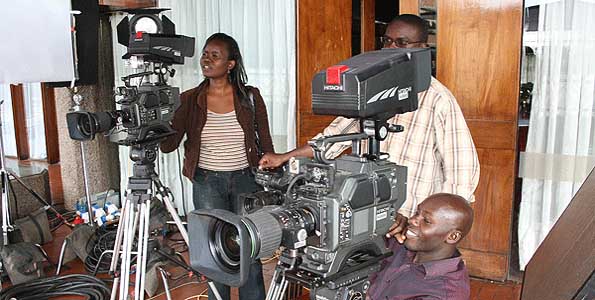 The press coverage and reporting of the recent electoral process has remained a highly emotive issue in academia, especially among lecturers and students of media, communication and journalism. From the political discourse on social media, there is an emerging consensus that the mainstream media bungled this election more than the IEBC and its chairman.

The concern, as being raised by civil society activists like Maina Kiai and others, is the slow detour to an infamous period not long ago when â€˜imaginations of freedom and pluralismâ€™ was a sure last date with the animals at Ngong forest, or the savages at Nyayo House. We who came of age just a decade after that inglorious era can only imagine its horrors.

The nibbling of dissenting voices, primarily through negative or lack of media coverage raises a fundamental question on the role of Kenyan mainstream media during elections. Can our mainstream media deliver the gains of democracy and free speech by bridging the gap between information and communication?

In the book Journalists and the Rule of Law (2010), media scholars Levi Obonyo and Erneo Nyamboga aptly captured our current situation when they asserted that the human resource challenge in Kenyan newsrooms are the twin issues of (i) lack of mastery of grammar and (ii) lack of sophistication to analyze issues. I shall desist from commenting on grammar!

The coverage of the last election, especially the presidential vote tallying at Bomas shocked media watchers, including those with very raw knowledge of journalism, when, after eons, the IEBC gave a shambolic briefing which was followed with no prodding at all from the coteries of journalists who were assigned the rare duty of telling the world how stronger our democracy is; and transparent and accountable, our institutions are. Journalism, the discipline I have labored so much in the university to learn trade and improve, was buried in that night!

But the above statement, taken as gospel truth, may help explain the many â€˜peaceâ€™ and â€˜move onâ€™ choruses emanating from all the usual purveyors of societal progress and grandmasters of double speak, from feeble churchmen to labor unionists. Are Kenyans really un-analytical or has the mainstream media â€˜conditionedâ€™ Kenyans to believe they are un-analytical? Did the Kenyan mainstream media, due to an intricate web of ownership steeped in tribal hegemony and political wheeler-dealing sacrifice all canons of journalism in an election where the publicâ€™s right to know has remained a mere theory?

Two phenomena are worth noting. Because mainstream media, having at its disposal all the investigative machinery, could not satisfy the citizenry with all the information it needed; many Kenyans, majority of whom are young restive population, turned to the social media propaganda where all manner of information: facts and lies, truths and half-truths; rumours, gossips and innuendoes flew haphazardly, and were believed most readily. In the social media, the mainstream media limped disastrously behind established bloggers with their own propaganda-thirsty audiences.

The second phenomenon is media bias-or the perception-of bias during coverage. The mere fact that the local media overplay the â€˜peace mantraâ€™ more than any other concerns being raised, which was then seen as the official government and jubilee strategy to downplay massive institutional failures by the IEBC in the conduct of this election, while also projecting the foreign press as only concerned with â€˜war and violenceâ€™; the local media lost the â€˜objectivityâ€™ ground.

At no point in the times of the Kenyan society did politics submerge all other issues like the period after the ICC became part of the Kenyan political dictum and this election. Politics became the lurking iceberg in the Kenyan titanic movement; and media politics, â€˜shittierâ€™ as ever, clouded the democratic ship till it became apparent that only the courts would be life-saving.

This iceberg represented the ethnicised debate and tribal anecdotes manufactured in the local mainstream press and dumped daily in social media as intellectual filth through slanted â€˜opinion piecesâ€™ by known tribalists and â€˜newsâ€™ from clueless anchors.

Studying the media coverage of this election, the media did not just answer Laswellâ€™s four questions of â€˜who says what to whom with what effectsâ€™; the media, more often, became the referee, created the players, developed the substitute list, Â and dished both the yellow-cards and red-cards even before the game was started.

We saw, in this election, how campaign rallies were captured and presented, how sound-bites: ethnic diatribes and comical sideshows; became real issues, and how journalists changed tone, posture and mien, to add or subtract the import of the message from the message itself, openly dwarfing McLuhanâ€™s famed quote: the medium is the massage!

In the final analysis, president-elect Uhuru Kenyatta, despite high probability that he may have won this election, has increasingly got to contend with a barrage of advertisements and media spins from tools like Johnson Mwakazi, all aimed at giving his win some legitimacy in the eyes of a skeptical public.