“Be there!” shouted Dr Martin Luther King at the eve on the ‘March on Washington’, one of the grandest civil rights marches in the history of US civil movements.

In Egypt, there was a revolution, then the army, then President Morsi. Now, at this very moment, there is a revolution going on; and the army has given timelines again.People are on the streets. Many people, and the rant is just beginning. 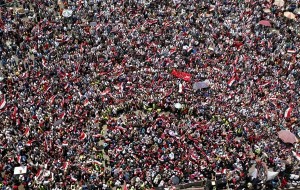 As President Morsi falls, the world is watching. From Washington to Moscow to Nairobi; governments are holding their breath, because at no other time is the politics of Northern Africa and the Middle East more intricate than today.

When Morsi took power, it was after the people took to the streets. He won the presidency by appealing to a large coalition of both muslims, christians and coptics; atheists and agnostics.

But as is becoming common for most African leaders, Morsi took to individualising institutional powers of the presidency. The people noticed, and the revolution fire was set ablaze again, this time, to consume the people who benefited from its earlier warmth.

As with the Egyptian civilization many centuries ago, the twin Egyptian revolutions today is having all the hallmarks of a new history being written.