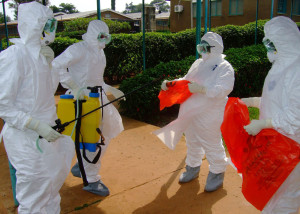 Even as the World Health Organisation declared an international public health emergency over the Ebola outbreak, travellers arriving in Nairobi from West Africa yesterday complained they were not screened for the virus at the Jomo Kenyatta International Airport.

They said that what they called negligence exposes them and other Kenyans to a fast-spreading disease with a fatality rate of 50-90 percent and no known cure.

Kenya health officials have said adequate measures are in place to prevent the entry of the virus.

At least 1,000 people have died from Ebola in West Africa â€” in Liberia, Sierra Leone, Guinea and Nigeria â€” and more than 1,700 others have been infected, according to the WHO. Those numbers are low by some estimates.

â€œIt was my concern that this country is not taking the disease seriously as the other countries do. It is because of this careless approach that I raised the matter with my MP so that she could promote public awareness,â€ David Lochuch Imana, a Kenyan immigration officer at the United Nations Mission in Liberia, told the Star after his arrival from Monrovia this week.

Lochuch said he was screened in Liberia and Ethiopia en route to Kenya, but health officers at JKIA airport did not screen him.

â€œIt is a worrying trend because it shows that there could be many people entering the country without being screened, when surveillance measures to curb its spread have been enhanced,â€ she said.

Professional screening of passengers from disease-hit areas during outbreaks is a standard practice in airports across the world. Health officials are required to quarantine anyone who looks infected.

On Friday, WHO declared an international public health emergency because of the outbreak in West Africa and called for extraordinary measures.

Kenya Director of Medical Services Dr Nicholas Muraguri said screening points have been set up at at all ports of entry into Kenya.

â€œThe ministry has established a Disease Surveillance/Rapid Response team and laboratory capacity to diagnose all hemorrhagic fevers including Ebola. We are, therefore, well prepared to identify and deal with any potential cases of Ebola within 24 hours,â€ Dr Muraguri said.

Symptoms of Ebola can show up from two to 21 days of infection and include fever, headache, joint and muscle aches, sore throat and weakness.

Other symptoms include diarrhoea, vomiting, stomach pain, hiccups, and rash with more devastating symptoms of internal and external bleeding in many patients.

It is spread through direct contact with body fluids of an infected person, including perspiration, saliva, mucus, blood, urine, diarrhoea, and objects they have touched.

In Uganda, health officials yesterday announced a man they had isolated since Wednesday at Entebbe, suspecting he had Ebola, tested negative.

The man, a Sudanese clinical officer, was identified during screening at Entebbe Airport where he had arrived on an Ethiopian Airlines flight.

â€œThe results came in and it is not a case,â€ health ministry spokeswoman Rukia Nakamatte told Uganda’s New Vision newspaper.

Although no Ebola case has been confirmed in the larger East Africa region, the Ugandan case had caused anxiety in Kenya because JKIA is the main transit point for travellers from West Africa.

A diabetic Liberian aboard a Kenya Airways flight had caused panic at the JKIA when he appeared sickly.

â€œIt was discovered that the person was suffering from hypertension, diabetes and stroke. He did not have signs of the infectious disease,â€ Dr Muraguri said.

The director said the risk of travellers contracting Ebola is low as the infection requires direct contact with body fluids or secretions of those infected.

Dr Muraguri said, however, the ministry will keep Kenyans informed about the outbreak and of any additional measures required.

The WHO’s declaration of an international public health emergency, demanding “extraordinary response, was only the third of its kind since such alarms were adopted in 2007.

The organisation stopped short of saying there should be general international travel or trade bans, but acknowledged that the outbreak was far from being contained.