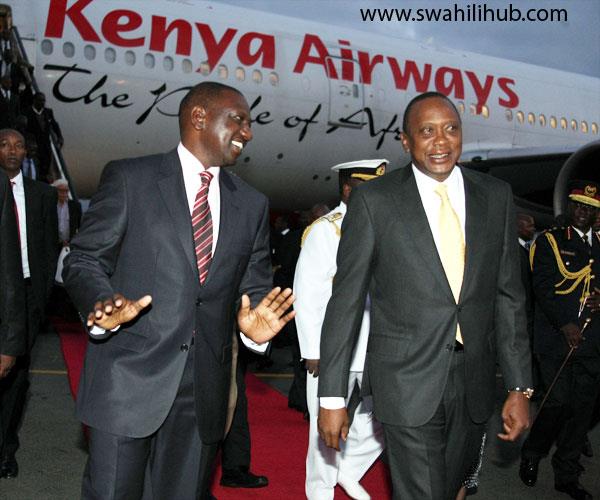 I take issue with Rutoâ€™s recent distancing from the letter, ostensibly authored by a Macharia Kamau, Kenyaâ€™s ambassador to the UN.
My message to the Deputy President William Samoei Ruto is that he needs to play his role as a loyal Deputy President.
Ruto needs to know that Uhuruâ€™s political future is bright with or without Ruto.
And in any case with or without Ruto, Uhuru would still have won anyway as he still had the Kibaki 2007 electoral map intact(with which Kibaki still won, even though most capitals believe Raila won).
Some if not all the players like Amani would have been accommodated in a working arrangement with TNA and this would have shored up Uhuruâ€™s political equation.
Rutoâ€™s presence in Jubilee actually drove away a horde of other willing groupies intent on going Jubilee. He is the reason Uhuruâ€™s win became controversial. He brought the Kalenjin vote but alienated the rest of the nation.

TNA strategists I believe are sly enough to have averted a second round with or without Ruto support for Uhuru.

And given that Kibakiâ€™s inner circle(the same that helped him win under unclear circumstances) signalled to have been keen on an Uhuru Presidency, Uhuru 2013 would have easily â€œwonâ€ using a refined version of the Kibaki 2007 political script- even if Ruto would have gone Cord, ODM or otherwise.

In addition, an analysis of the prevailing political terrain reveals in the URP leader and second Principal an encircled politician, a marked man, sandwiched between political heavyweights all â€œbaying for his bloodâ€.

Uhuruâ€™s political fate isnâ€™t intertwined with Rutoâ€™s, itâ€™s actually in Rutoâ€™s best interest to pander to Uhuru. Uhuruâ€™s inner circle had options leading up to the 2013 election. The odds are that Uhuruâ€™s script to â€œwinâ€ The Presidency in 2013 without Ruto/Kalenjin support was feasible. Ruto was just lucky to have been at the right place at the right time. He owes his position to Uhuru, not the other way round.

Thatâ€™s why Uhuruâ€™s ceding of key portfolios to Ruto/URP and allowing his DP to have his own lectern/play a crucial role during the naming of the cabinet appointments appears to me as a sign of self-confidence by a President who since March has been on a winning streak- overcoming insurmountable odds, including securing an invitation by the occupant of No 10 Downing Street.

Ruto is not indispensable especially given that between his and Uhuruâ€™s appointees, itâ€™s clear who stuffed the cabinet with the most of his tribesmen/women. This brings Ruto out as an insecure man who needs to surround himself with people that he can trust.
Uhuru seems to have been thorough both in the quality, diversity and credentials of the men and women he picked.

And in the vetting hearings, itâ€™s clear whose appointees are more wanting both in presentation, and delivery. Those who cannot articulate without reading a piece of paper. Those choices that makes one change to another channel.

Going forward, the President has options which may include, but not limited to a Grand Coalition alliance with non-Jubilee parties to institute up to and including constitutional changes if that is what it would take to nip any Ruto led rebellion in Jubilee.

URPâ€™s 60 or so MPs are miniscule to block any constitutional amendment intended to dismantle, shred and then re-invent the power structure in Nairobi.

Any slight show of disloyalty by the Deputy President to his boss means that The President has a wide field of play, enough to circumvent any of Rutoâ€™s future â€œdisloyal political manoeuvresâ€™â€.

And the political dustbin of disloyal Veeps isnâ€™t empty either. Kibaki, Karanja, Jaramogi, Murumbi were once jettisoned into it. Rutoâ€™s only advantage is that the route to cutting him to size would be a longer one, but certainly feasible.https://www.kenya-today.com/news/deputy-president-of-kenya-william-samoei-ruto