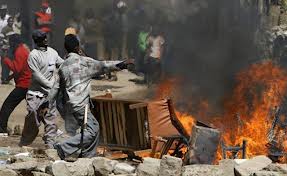 This article titled “Deadly clashes in Kenya fuel fears of election violence” was written by Clar Ni Chonghaile in Nairobi, for The Guardian on Thursday 13th September 2012 14.19 UTC

Deadly clashes in a volatile district on Kenya’s coast have raised fears that politicians may be exploiting tribal rivalries before elections next March, with some observers also suggesting that weapons and militants from neighbouring Somalia may be involved.

At least 116 people have been killed in the Tana river delta since late August as hundreds of fighters from the Pokomo and Orma tribes, armed with guns, spears and bows and arrows, attacked each other’s villages, burning homes and killing people.

The violence has exposed a potent cocktail of tensions before the first election since more than 1,200 people were killed after a disputed 2007 vote in east Africa’s largest economy.

Thirty-eight people, including five children and nine police officers, were killed in Kilelengwani village on Monday. A dusk-to-dawn curfew was imposed but the next day a group of around 300 attacked several villages, killing at least four people.

More than 12,000 people have been displaced in the region of forests and mangrove swamps about 150 miles north of Mombasa, according to the Kenya Red Cross Society. An assistant minister, Dhadho Godhana, was arrested on Wednesday over an allegation that he helped to fuel the violence, which started in August when Pokomo raiders killed more than 50 Orma. Godhana has pleaded not guilty to charges of inciting violence.

Human Rights Watch said its research showed that at least three other politicians might have been involved. It also found that police failed to respond to reports from residents over the past six months that violence could be imminent.

“Members of both communities, including victims of the attacks, told Human Rights Watch that area politicians who hoped to win seats in next year’s elections were involved in the violence on both sides and that the villagers had informed the police about their suspicions,” HRW said.

The US state department said that the attacks threatened to destabilise the surrounding region and urged the government to bring those responsible to trial and unite opposing factions.

Pokomo farmers and the semi-nomadic Orma have clashed before over water, land and grazing but Phyllis Muema, executive director of the Kenya Community Support Centre, said this time was different.

“This is actually a massacre. The level of killing shows very clearly that this is not just a resource-based conflictâ€¦ The sophistication of the arms they are using indicates that they have acquired them, we suspect, from neighbouring Somalia,” Muema said.

Kenya has thousands of troops in Somalia as part of an African Union peacekeeping force fighting the Islamist militants of al-Shabaab. The Kenyans are moving towards al-Shabaab’s stronghold at Kismayo, raising concerns that some militants might flee across the border into Kenya’s tinderbox coastal region.

This tourist region, where five-star luxury co-exists with extreme poverty and where indigenous tribes have long felt neglected by authorities, is seen as a potential flashpoint before the March vote.

Some Kenyan commentators have linked the once-banned Mombasa Republican Council, which wants the coast to secede, to the Tana river clashes, but the secretary-general, Randu Nzai Ruwa, denied the charges.

“The MRC is not involved in thisâ€¦ We are fighting for the coastal people,” he said, adding that he believed the clashes had been orchestrated to drive people off lucrative sugar cane farms.

Kenyan elections have often triggered violence between tribes, as political parties tend to draw support from a particular ethnic group. Three senior politicians and a radio presenter will stand trial at the international criminal court in April next year over their alleged roles in fuelling the 2007/08 violence, and many Kenyans had hoped this would act as a deterrent in future elections.

However, two of those facing trial are still running for president, and analysts say violence is a real possibility again.

The stakes are even higher this time. In March, Kenyans will, for the first time, vote for county governors and senators, meaning there is more power to be won at the local level.

The police service has been criticised for failing to stop the bloodshed.

“The response has been pathetic,” Robert Ndege, a political risk consultant at Africapractice, said. “If ([the security forces)] can’t contain one flashpoint, what happens if this is repeated across the country?”

Ndung’u Wainaina, of the International Centre for Policy and Conflict, said security forces must have known attacks were being planned. “There is no way a group of about 300 militia canâ€¦ make a brazen attack without some very strong powerful support,” he said.