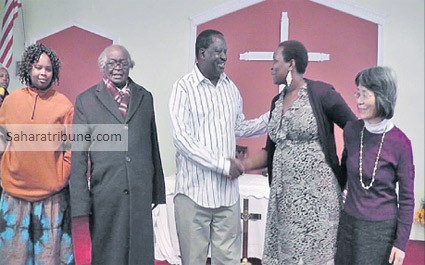 When a Facebook flier announcing that former Prime Minister Raila Odinga would attend a service at St Stephens Church in Lowell, Massachusetts was circulated early last week, many people who saw it were piqued.

â€œWhen I saw the post on Facebook, I doubted, â€˜Agwambo at St Stephens?, that to me was not for real,â€ said Mr Muthui Mwangi, a Kenyan living in Chelmsford, Massachusetts.

Mr Mwangi doubted because the area is mainly populated by members of the Kikuyu community, who attend St Stephens Church.
Then there were those who believed that Mr Odingaâ€™s real intentions to attend a service at the church were anything but to pray. It was easy to understand this apprehension given the chasm that exists between people from the Luo community and those from the Kikuyu when it comes to politics.

There are two regions in the US that are predominantly Kikuyu. Boston, especially the cities of Worcester and Lowell. Then there is the Atlanta area especially Marietta. Social functions in these places appear, feel and sound more like they are taking place in either Murangâ€™a or Nyeri. For instance, children born in the US to Kenyan parents in Lowell sing in near perfect Kikuyu.

Therefore, it was no surprise based on the interviews the Sunday Nation conducted among residents of Lowell the day before the church service that few people knew how Mr Odinga would be received if he showed up at the church despite the fact that he a respected opposition political leader and a former Prime Minister.

Briefing the Sunday Nation in his office on Saturday, Pastor Kimohu acknowledged the tensions that had enveloped the area before Mr Odingaâ€™s visit. The pastor booked a banquet room in one of the biggest hotels in the area for the former PM to interact with Kenyans after the service over a meal.

It is against this background that the former PM walked into St Stephens Church Sunday morning, unannounced and unnoticed by the congregation, in the company of just three people â€” his personal assistant in the US, Mr George Osewe, his friend Mr Sammy Maina and his wife. He strode in casually in the middle of a praise and worship session, took his position in the front row and started dancing along to a Kikuyu praise and worship song.
Cameras swung

It is when the cameras swung and focused on him that people noticed he had arrived. Highly talented gospel recording artiste Esther Ndirangu commonly known as Queen Essy who was among the praise and worship group on stage, took the lead microphone, gave the band a thumbs up cue and seamlessly transitioned from the Kikuyu song to Kiswahili. Soon the sanctuary that was half-full suddenly filled up and the mood changed. Everyone was suddenly sucked into a praise and worship mood that many described as inspirational.

â€œAfter that, I think the Holy Spirit completely took over. I could see everybody including the former PM dancing and transported to a higher ground and I knew there and then that there is no politics in the Kingdom of God. To Him be the glory,â€ Ms Ndirangu said after the service.

When Pastor Kimohu rose to pray after the singing, he heaped praise on the former PM for his humility and reconciliatory approach to matters, saying leadership came from God and once a leader, one would always remain a leader.
The picture of the former PM standing on stage holding a young girl in his arms as the congregation prayed for the children is an image many people will remember for a long time to come.

â€œThat time when the PM stood there with children all around him looking excited and patiently taking pictures with them is a moment you wish could freeze in time,â€ said Sammy Maina, a worshipper,

At the end of the service, worshippers listened to his message of reconciliation that lasted exactly 40 minutes. They realised the former PM was a warm person whose visit meant no harm