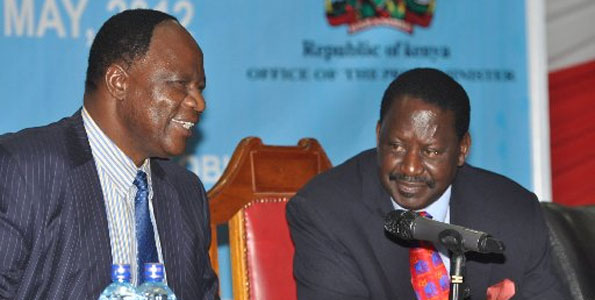 By Julius Sigei for Sunday Nation

He is cool and collected. And he has no qualms sticking his neck out for a cause he believes in.

When 69-year-old Rongo Member of Parliament Dalmas Otieno Anyango took a 30-year-old as his third wife last year, he said it was to reach out to the youth.

And now he is in the news again, this time defending Nairobi Governor Evans Kidero against allegations that he is plotting a coup against former Prime Minister Raila Odinga who has held a vice grip on Nyanza politics since the death of his father Jaramogi Oginga Odinga 20 years ago.

When we met the towering politician this week at his Ranen home in the South Nyanza sugar belt, he dismissed the Orange Democratic Movement (ODM) MPs whom he said were still in denial that Raila lost the elections last year, saying as a statistician he would deals only with facts and not hero-worshipping.

But he had no kind words President Uhuru Kenyatta and Deputy President William Rutoâ€™s Jubilee coalition either.

The ruling coalition is made up of President Kenyattaâ€™s The National Alliance (TNA) and Mr Rutoâ€™s United Republican Party (URP).

Mr Otieno accused the coalition of rigging the March 4, 2013 General Election in order to avoid a re-run.

The Makerere-trained economist who was one of the few ministers from Luo Nyanza in the Moi administration also told us why he wants cases facing the Deputy President at the International Criminal Court (ICC) withdrawn.

Q: You are one of the first Kenyans to have attended Makerere University at the height of its excellence. What did you learn?

A: I leant how to rely on underlying data to analyse issues-looking at the facts of each case, something that I apply to this day.

I must also add that Strathmore, where I went before going to Makerere, played even a greater role in imparting life values in me.

Q: What body of literature do you find most awakening?

A: I am a student of Economics and Mathematics and I interrogate works by different authors. But in my field, which is applied statistics, we rely on facts more than authors.

Q: You worked with Daniel Toroitich Arap Moi at a time few Nyanza leaders saw eye to eye with the self-declared professor of politics.

What one thing do you think Kenyans donâ€™t know about him?

A: That he was truly committed about his campaigns on peace and national unity. It is a fact that he didnâ€™t manage the economy well but we must also remember that circumstances at the time were hard.

But we also had our low moments and in 1996, he sacked me for siding with sugarcane farmers when I opposed the importation of sugar into the country.

Q: You have come out to insist that the cases facing Deputy President William Ruto at The Hague should be dropped, prompting some ODM diehards to suggest Dalmas is going against the wind.

A: I go with facts. I will not just support you because you want me to. You must derive a reason why I should do so.

Ruto went to The Hague on our behalf as ODM and even though he later decamped to another party, it does not matter.

If Uhuruâ€™s case collapses, like there have been indications to this effect, Rutoâ€™s should be withdrawn as well because remember the cases are also political.

Even this far, the cases have served some purpose. They have taught us how not to handle the voters in an election contest.

You realise that some of these people are prompted to make such sentiments to please those who have sent them.

It is part of playing to the gallery. I call it phase one sycophancy which soon graduates into hero worship.

Q: Raila has twice come a breath away from seizing the levers of power. Is he the quintessential tragic hero caught up in the battle between fate and destiny?

A: Raila did not win in the last election, but neither did Uhuru. Okay Uhuru led, but he did not attain the Constitutional threshold of 50+1 per cent of votes cast.

Results from 2,400 polling stations turned out to be different from what was declared on the ground.

When someone says they are digital, it means a smart manner of rigging-the digital way.

They digitally rigged out Raila and our hope was a run-off although we had no guarantee that we would have trounced them even on this.

Raila told me that Kibakiâ€™s party, the Party of National Unity (PNU) had stolen more than 600,000 votes but I could not find the evidence.

I was only able to trace 477,000 as I did the audit myself. ODM MPs who insist Raila won on March 4, last year are in denial.

Q: You recently stated that the people of Nyanza should open doors to anybody knocking with assistance. At the same time, Ndhiwa MP Agostino Neto has said that Raila did not win in 2013.

A few months ago, these comments were politically suicidal. Are we about to witness a revolution in Nyanza?

A: There is no revolution. Leaders are free to air their minds. I believe we have such democracy in ODM.

Q: Journalist Philip Ochieng has described you as very intelligent, mature and highly educated saying you are the best suited to succeed Raila Odinga?

A: I donâ€™t respond to an individualâ€™s opinion on such matters. I could if they were a clear majority.

May be, I need say 10 million of such to prompt me but not an individual. Please allow me to hear more of these opinions before I can respond.

Q: Do you want to be president?

A: Let the people debate and the decision will be made a year to the elections.

A: I support Dr Kidero because he needs the support of all of us in ODM.

In fact, had I attended the meeting in Bondo where I hear his harambee activities in Nyanza were discussed, I would not have allowed that to be part of the agenda. He should not be isolated.

He is the ODM governor managing the most difficult county and if ODM were serious about promoting good governance, then Kidero deserves their support because if he succeeds, it would be a springboard on how ODM would run the state if granted mandate.

Those fighting him are myopic.

Q: Yet Dr Kidero has been accused of staging a premature coup in Mr Odingaâ€™s Luo Nyanza support bastion.

A: There is nothing wrong in him preparing ground for any ambition of any sort if that were to be the case.

Do you want any other Luo to stop working until given green light to do so by someone?

He could have taken even Sh100 million to the harambee because there is nothing political in improving the lives of his people.

I would only be concerned if he was violating the law which bans harambees eight months to elections but we are not facing an election.

Q: Why did you snub the Bondo meeting?

A: I did not snub the meeting. I had been called to Nairobi to participate in the mediation talks on the crisis in South Sudan.

Q: You served under president Moi, the joint government of Mwai Kibaki and Raila and now you are an MP in the Uhuru-Ruto era.

Which one do you think has been the most inclined to public service?

A: The Grand Coalition government. It made major strides in a number of fields like infrastructure and services to the people.

Q: What is you rating of the jubilee governmentâ€™s nine months in office?

A: Jubilee is too new to be given any credit.

However, what I have noticed is that the President is preparing a very dangerous ground for corruption from the appointments we have seen him make recently.

This way, it would be hard to fight corruption.

A: No, unless senators accept that theirs is the weaker organ or if we go for a referendum to change the law and make Senate the stronger House.

The trouble is that most of these senators are experienced fellows who on getting to the Senate, they realised that their capacity was far higher than their mandate.