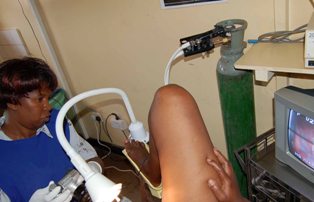 A Mombasa health lobby group has decried the increase in cancer, especially cervical cancer, among women.

The Cervical Health Network said at least 40 contract cervical cancer in every 1,000 women.

The lobby has launched a cervical cancer awareness and screening campaign, Break the Silence, to educate the public on the dangers of cancer and its treatment.

Speaking to the local reporters, CHN project coordinator Rosemary Kombo said the organisation has screened more than 300 women aged between 18 and 29.

She said women in this group are more vulnerable to cervical cancer.

Kombo said the bill states that the government should allocate resources for procurement of cancer treatment equipment and training in medical colleges.

â€œServices to cancer patients are delivered at the national level whereas the problem is at the community level. Commercial sex workers and drug users are the group at a higher risk,â€ she said.

CHN has partnered with the Red Cross Society in the campaign.