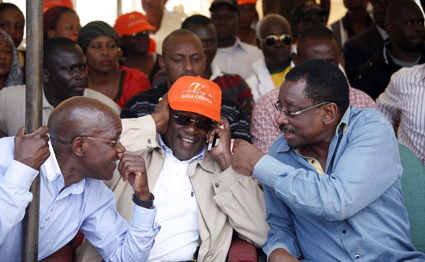 A storm is brewing this week with calls from two potential quarters with mass followers over the government’s decision to pay Anglo-leasing billions while at the same time increase the college fees of university and college students.

â€œUhuru said the government should not pay the money in 2007, then he is now paying it when he is President. This is corruption of the highest order,â€ said Senator Muthama.

â€œKenyans fought hard for democracy but the Jubilee coalition is taking us back. We are going to paralyse this government. We are for the teargas and bullets but workers and the general public are ready to show that they are not happy with the government,â€ added Muthama.

The CORD will today hold a mammoth rally in Nairobi with another team already in Kisumu, the heartland of opposition politics in Kenya. The Kisumu team has been joined, at funds-drive, by pro-devolution czar Isaac Rutto.

On the comrades front, University students have called for the removal of Education cabinet secretary Prof Jacob Kaimenyi. The students, led by maverick SONU Chairman Babu Owino, under the banner of Kenya University Students Organization, will head to Kaimenyi’s office on Tuesday to rant the whole day. Their call is simple: No University fee increments.