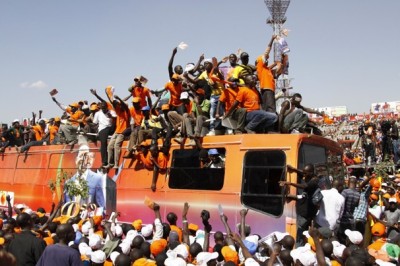 Enraged CORD supporters tired with the Jubilee and Mainstream media constant reminders of ‘early politicking’ fired back telling their counterparts that it was them who begun campaigns early in the day.

“They came from Hague and headed direct to Uhuru Park, then they were in Gatundu, and everywhere. . .we were still in government,” said a visibly angered CORD supporter alluding to the time when Prime Minister and CORD leader Raila Odinga could not politick because he was still serving in government.

The new tiff off is as a result of the new jubilee propaganda of telling Kenyans to concentrate on “development matters” and not referendum being pushed by governors from across the political divide and CORD leader Raila Odinga.

“We can politick and develop, we can multi-task, we’ve done so since 1969. They are enjoying the fruits of our politicking,” joked Otis Jakisumo, a resident of Siaya County.

CORD supporters are also raising concern that the Kenyan mainstream media is hell-bent in preaching development just as they earlier preached “peace” immediately after the disputed elections, rather than allowing divergent views to be heard and debated.

“The media is still gatekeeping for the Jubilee, they (Jubilee) tell lies there which those people report to us. Take the Russia tour, didn’t the media say it was a State Visit?” wondered another.

At the centre of this new battle-front, played by supporters on behalf of the two political formations, is the widening tribal and regional gaps which Kenyans are increasingly experiencing.

On one hand, Jubilee Alliance supporters accuse CORD of doing everything to make the government, and especially the President and Deputy Â get embarrassed in their regions. CORD rebuffs this claim, saying not all parts of the country has benefited from Kenyatta’s presidency. They cite the appointments made since Uhuru and Ruto took over.

“Like Kethi Kilonzo said during the Supreme Court petition, even the little our regions had before they came in are being taken away. The only people being sacked from government agencies seem obvious to all.”

The supporters have instructed their leader, Raila Odinga, to increase the tempo of political activities, saying they are comfortable with the path the coalition is taking.

“We are comfortable with our new role in the opposition. Our work now is to tell Jubilee that they have no ideas of moving this country forward, they never had.”

Responding to his people, CORD leader Raila Odinga has planned a series of political activities in Western and Kisii region meant to add political weight to the referendum push which the Jubilee Alliance has since abandoned.

As for the supporters, the new political rallying call will continue to boomerang: You started it earlier; we are just beginning.