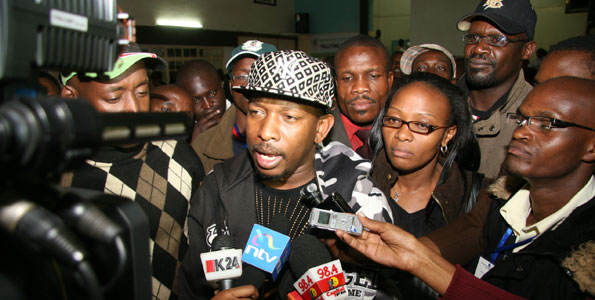 Judge Isaac Lenaola yesterday declined to stop the rally called by the Cord Leadership at Uhuru Park on Monday. The judge warned, however, that the rally should be peaceful and without any chaos.

Justice Lenaola said anyone who calls for mass action during the Cord rally will be held personally responsible for any acts of violence and destruction occasioned on members of the public or property.

Last evening, Raila wrote to Chief Justice Willy Mutunga protesting the Court decision terming it an abuse to the rights of Cord and its supporters.

â€œMass action is just a common phrase to describe the exercise of this constitutional right and is not a legal principle that can rend itself to interpretation of the court outside the confines of Article 37,â€ Raila said.

â€œRulings like the one issued against Cord today only fortify our concern that Kenya is marching backwards to the dark era, instead of forward to a happier, freer society that we long desired and fought for, Raila said.

â€œ It is disheartening to see that we are going back to those days and that it is happening under the new Constitution,â€ Raila said.

The judge had agreed with a case filed by Nairobi Senator Mike Sonko that even though Cord has a constitutional right to assemble for public rallies, their calls for mass action is null and void.

â€œThe meeting should be peaceful without participants being armed in any manner; it should be without any incitement, inflammatory rhetoric or defamatory remarks. It should not disrupt the daily business of members of the public who are not part of the public meetings,â€ Lenaola ordered.

He ruled in two cases, one filed by Sonko and another by the Mavuno Youth Congress. Lawyers representing the Senator, the youth group and Cord agreed that party officials should not make incendiary statements during the rally.

The Coalition leadership has been calling for mass action to push for national dialogue on insecurity, unemployment, problems of devolution and other issues. Raila, Kalonzo and Wetangula have said President Uhuru and Deputy President William Ruto should resign for not fulfilling their pre-election pledges.

They said they will take to mass action to push Jubilee out of power if an impeachment motion fails. They have also asked people not to go to work on Monday, claiming they have a right to call a public holiday to allow people to attend what they say will be a momentous meeting.

Justice Lenaola ruled, however, that July 7 is not a public holiday and any such call by Opposition leaders is invalid. He ordered the leaders to refrain from calls for mass action on July 7 or any public rally.

He directed Senator Sonko to serve the CORD leaders with the orders through all national radio stations and newspapers. He said respondents will be held responsible for breach of his orders.

Sonko says political rallies should not be held until the country is calm and political tension subsides. He argues that unless political rallies are suspended citizensâ€™ right to life and property are threatened. They also could be driven by fear to leave their homes, he said.

The Senator also seeks a declaration that no individual or entity has the Constitutional authority to declare a public holiday. He says demands made by officials and members of Jubilee and Cord can only be discussed through duly constituted institutions.