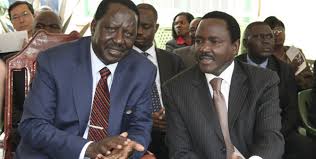 ON THE SUMMONS ISSUED BY THE CRIMINAL INVESTIGATION DEPARTMENT (CID) AGAINST ELIUD OWALO FOR ALLEGED PLANS TO DISTABILIZE THE JUBILEE GOVERNMENT.

Fellow Kenyans as the Country marks and discusses the 100 days of Jubilee government it is only fair that we issue a caution Kenya must not revert to the dark days of repression, indeed many a Kenyan are scared, worried, and concerned about the perception that individual liberties and freedoms are being rolled back and curtailed not only for the lowly person but unbelievably even for principals and icons of democracy in Kenya.

It is only two days ago that the Deputy President William Ruto was quoted in the media calling for the possible arrest of the Prime minister Rt. Hon. Raila Amolo Odinga because of serious issues he raised concerning the IEBC.

As they say the guilty are afraid, barely days after Hon. Raila Odinga chastised the disgraced commission his aide Eliud Owalo is being accused by the Criminal Investigations Department and Kenyan Intelligence (Kenya Police) of working to distabilize the Jubilee Government. It is instructive that Mr. Owalo is not just another aide, but is infact the individual that ran the Prime Ministers Campaign Secretariat. As such he would be privy to details of anomalies and short comings and mal functions that led to a disputed election which was argued in the Supreme Court.

Following an opinion piece which Mr. Eliud Owalo wrote in the Sunday Standard dated 14th July, 2013 titled â€˜Why the Electoral Commission must be disbandedâ€™ all hell has broken loose. The CID are making unsubstantiated, comical, cheap yet treasonable allegations against Eliud Owalo as follows:

1. That Mr. Owalo is conducting secret meetings and organizing youth around the Country, in major towns and slums for purposes of fomenting an uprising or revolt against the Jubilee Government.
2. That Mr. Owalo is organizing diplomats, foreign embassies, clergy and the civil society to rise up and oppose the Jubilee Government by causing dis-affection.
3. That all this Mr. Owalo is doing to mimic an Egyptian style revolution or uprising also part of what was called the Arab spring.
4. That Mr. Eliud Owalo has received millions of shillings from foreign embassies through a Nairobi Law firm is the guise of proceeds of legal transaction but which will be used to further the above objectives.

The above allegations are an insult to Kenyans as the source of this so called intelligence sources of information was a blog know as The Jackal News ran by a known TNA operative who clearly is carrying out errands for the Jubilee Government.
But let us be clear Eliud Owalo is but a decoy. The pursuits of Owalo is but a diversionary tactic, for the real target are his bosses; the coalition principals Hon. Raila Odinga, Hon. Kalonzo Musyoka and Senator Wetangula.

Kenyans are not fooled. We urge the Jubilee Government to mind the business of Kenyans, to respect and uphold the Constitution of Kenya and to cease and desist from using untoward tactics by ways of withholding benefits for the principals, frustrating their smooth movement in and out of the Country using our airports and making wild baseless allegations yet serious accusations. The Country must not be divided further.
Let us not revert to a police state and this Getapo tactics must stop.