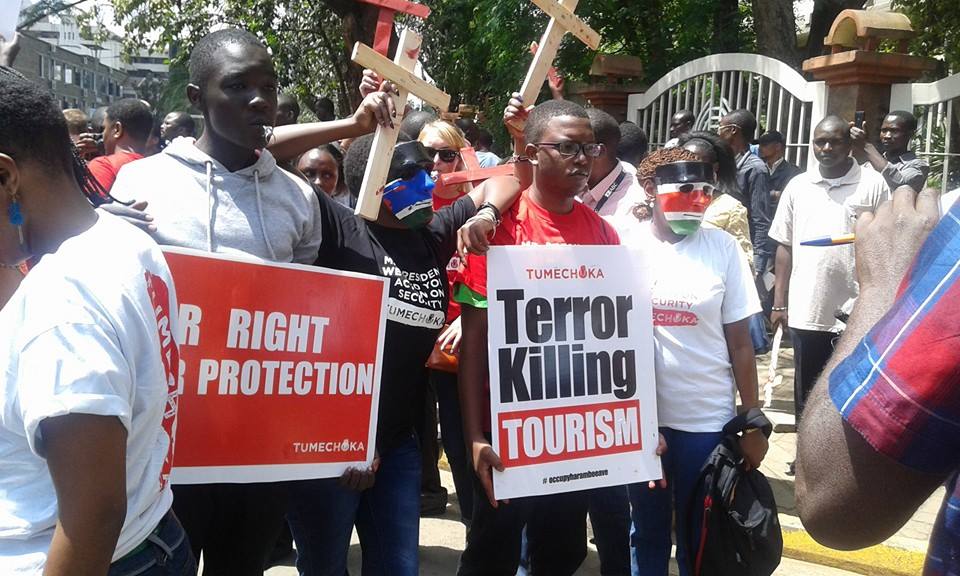 Kakamega Senator Boni Khalwale has joined the #OccupyHarambeeAvenue protest saying that he is in support of championing for security to be upheld in the country.

Khalwale said that he was affected by the Mandera attacks on Saturday in which 28 people 21 of whom were teachers, were killed in Mandera in that 11 of the dead were from Kakamega county.

Khalwale joined the protesters who assembled at Nairobiâ€™s Harambee Avenue outside the office of the President to calls for the sacking of Inspector General of Police David Kimaiyo.

The protesters are also agitating for the sacking of Cabinet Secretary for Interior Joseph Ole Lenku. The two have been accused of laxity in acting on insecurity in the country.

The protests have been occasioned by an attack on a Nairobi-bound bus from Mandera over the weekend in which 28 people were first tortured then shot dead by assailants believed to be al Shabaab.

The protesters have prepared a petition to give to the president who is not in his office.

Earlier on, a group of street urchins had attempted to disrupt the #OccupyHarambeeAvenue protest being led by former photojournalist Boniface Mwangi, but were repelled by the large group donning anti-Kimaiyo and lengo writing.

There is a heavy presence of security personnel on ground at the Harambee Avenue demonstrations.

The protesters have vowed not to leave Harambee Avenue until the president receives the petition.