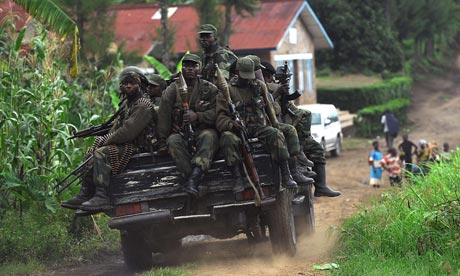 Congolese soldiers ‘drunk, angry and paranoid’ in contrast to apparent order of rebels, but both sides accused of abuses

BY:Pete Jones in Minova and David Smith in Rutshuru for the guardian.co.uk, Monday 26 November 2012 12.10 GMT

“The soldiers came and they started to shoot and rape our women. They stole all the food and goods in the shops. They said if anyone spoke out against them, they would be killed.”

The soldiers being described do not belong to a rebel militia running amok, instead they are members of the national army of the Democratic Republic of the Congo. The accusation was made by a resident of the town of Minova, who did not wish to give his name for fear of reprisals.

An extraordinary role reversal is taking place amid the violent conflict in eastern Congo. The rebel M23 movement is well-equipped, clad in crisp uniforms and gives the impression, at least when TV cameras are watching, of military discipline. The official national army, meanwhile, is hungry, badly paid and collapsing into disarray.

After M23 swept through the city of Goma last week and seized a satellite town 26 miles (40km) to the west, the Congolese army had mounted a surprise counterattack. It failed spectacularly. Thousands of army soldiers retreated to Minova, around 50km from Goma, with smashed regiments mixed up and leadership sorely absent.

They are visibly drunk, angry, paranoid and intent on demanding money and cigarettes from visitors and locals. Civilians describe the tension as unbearable and accuse the soldiers of rape and looting since their arrival last Thursday. A UN source in Minova backed the claims.

Mousinganga Siprian, an elderly man with a bad leg and crutch fashioned from a branch, said the soldiers had also killed people, though that could not be confirmed.

The Congolese army seems to be in a tailspin. The commander of the ground forces, General Gabriel Amisi, was suspended last Thursday after a UN report accused him of supplying weapons to illegal rebel groups.

Analysts in Congo suspect the suspension may also be punishment for the army’s meek defence of Goma. M23 launched its advance on 15 November and had captured the city, home to around 1m people, by midday on 20 November. The army fled and allowed them to walk into the city.

General Francois Olenga, Amisi’s stand-in, arrived in Minova on Saturday and has begun the unenviable task of reorganising the troops, instilling discipline and boosting morale. However, another emphatic defeat at the hands of M23 could spell the complete the disintegration of the army in this troubled region.

Official estimates of the army’s manpower stand at 150,000, though sceptics believe this is wildly exaggerated to conceal corruption, and put the true figure closer to 70,000. M23 was thought to be only 1,500-strong before it took Goma, but this figure is now likely to be much higher.

The army’s decline is in stark contrast to the growing confidence and discipline of rebel in and around Goma. In scenes more reminiscent of liberating government forces, M23 marched into Goma with eyes fixed straight ahead, paying little attention to the photographers, cameramen and journalists following them and asking questions.

Observers increasingly perceive the fingerprints of Rwanda, accused by the UN of providing M23 with military and financial support â€“ evidence described by British foreign secretary William Hague as “credible and compelling”.

In the M23 bastion of Rutshuru, there is a superficial calm as armed uniformed rebels patrol the town. At a local administrator’s office, with dramatic views of mist-surrounded hills, M23 fighters stand guard, salute their commanders and rest in humble mudbrick dwellings among the trees.

A colonel there, who did not wish to be identified, said M23 soldiers get two meals a day, civilian clothes and soap to wash them, access to medicines and a team of 18 doctors â€“ including exiles who have returned from the UK and other countries. They even have a barber.

The colonel denied Rwandan involvement. Flourishing a digital camera, iPhone and Samsung laptop, he showed photos of UN ammunition that he said M23 had captured from the fleeing Congolese army. M23’s uniforms were bought, he added, though he did not know from where.

“People say the proof of Rwandan support is the new guns, but we get them from the government soldiers at the front line,” the colonel said.

He claimed M23 only imposes a third of the taxes that the government did. So how do they afford it all?

He denied widespread allegations from the UN, Human Rights Watch and other organisations that M23 has perpetrated killings, rapes and other atrocities. He was only aware of one M23 soldier who had murdered a civilian, he claimed, and that soldier had been disciplined. Other attacks have been carried out by youths who had acquired government army uniforms and guns, he added.

“We are Christian. We have a big fear of God. We pray. It doesn’t make sense to kill and rape and loot. We are here for the cause. I had a good life before with a home and vehicle, but I came here where I get bitten by mosquitos. Would I just come here to rape? It doesn’t make sense.”

However, several local residents painted a less rosy picture of life under M23. A 31-year-old teacher said: “We are forced to live with them, whatever our hearts. How can you support someone when you don’t know their objectives? Even a child can tell you they are supported by Rwanda. Everyone knows.”

A 27-year-old farmer, with a baby tied to her back, accused M23 of forcing her to bring produce to its warehouses then failing to pay for it. “They also come during the night,” she said. “They knock and if you don’t open because you are afraid, they force the door or shoot with weapons.

“Then they fill their vehicles with food. When you are crying and ask for help from the police, they don’t come to help. When you go the fields and soldiers come, you have to pray.”

The woman added: “God will not accept M23 because we are suffering so much. If they took the whole country, nobody will be able to speak. We will live like slaves.”