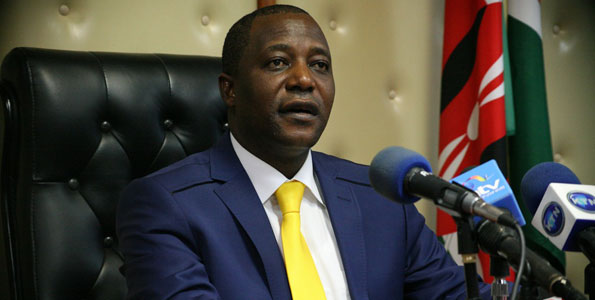 President Uhuru Kenyatta’s cabinet secretary in charge of labour, Kazungu Kambi, may be learned up to Kenya Certificate of Secondary Education level, a lobby group is in court to confirm. On Mzalendo, a website chronicling the history and bio of parliamentarian and Kenyan leaders, Kambi’s education credentials ends at ‘advanced diploma’ of some un-indicated discipline studied at Kenya Polytechnic! However, what is known is that he attended Shimo La Tewa Secondary and Mwijo primary school(s).

At the centre of the move rests the continued ‘blunders, some so embarrassing, that the labour cabinet secretary has engaged in since taking over office. Sources at a recent meeting between the labour cabinet secretary and officials of the International Labour Organizations indicate the contribution of Kambi was so underwhelming that most staff from his ministry felt insulted.

“He could not tell which charters and treaties Kenya has domesticated or ratified. He kept on saying Kenya will ratify this and that treaty, including some which were ratified in the 1980s.

Kazungu Kambi’s CV is shrouded in mystery, with critics claiming his degree is fake.