First they said it would be ‘essential contacts, then they pussyfooted!

Verbally violent clashes are expected in Nairobi this week as civil rights organizations and other non-state human rights actors are expected to demonstrate over plans by western diplomats to scuttle the trial of President Uhuru Kenyatta.

The revelation that a section of European Union and other Western diplomats are drafting a request to the United Nations Security Council to defer the cases involving President Kenyatta by at least one year has shocked Kenyan civil society groups, many who have been working closely with the victims since 2007/08 to ensure they get justice from the International Criminal Court.

So outrageous is the new revelation to Kenyans that Nairobi may experience a series of violent confrontations, all in bitter word exchanges, between the NGOs and anti-ICC characters. Already, one David Matsanga is raring to go!

A senior human rights personality based in Nairobi told this writer that the new attempt by western diplomats is ‘an insult’ to a country already worn out by the ICC cases.

“Either they terminate the cases completely or continue with them. Next year he will still be the President, so what will have changed then? This is an insult to a people already tired with hearing ICC this ICC that. . .” he said, requesting anonymity due to the sensitivity of the issue.

The Telegraph, a UK newspaper, reporting from Nairobi run a story claiming European diplomats in Nairobi are pushing the Security Council to delay the Kenyan cases till next year.

“Western diplomats are preparing a UN Security Council resolution that would put the International Criminal Court (ICC) case on hold after the African Union lodged objections to the trial” reads the paper. Interestingly, the paper mentions Westgate as part of the reasons why Kenyatta’s trial should be delayed.

“The Telegraph understands that European officials have sought to adopt measures to ensure Mr Kenyatta is not forced to leave the country in the wake of the Westgate incident”.

The development, should it sail through, will convince the quarters still backing the court in Africa that indeed, justice at the ICC is not blind to the status of individuals appearing before it, a charge critics may further use to continue discrediting the court as a political institution.

Curiously, on Wednesday last week, Uhuru Kenyatta met both the Russian Ambassador to Kenya, Â Alexander MararenkoÂ and his United States counterpart, Robert Godec. But sources near state house gate have revealed the two ‘gentlemen’ only discussed bilateral issues between their countries and Kenya. 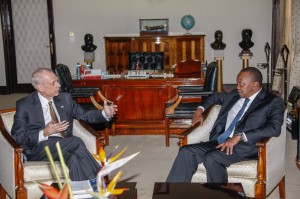 President Uhuru Kenyatta with US Ambassador Robert Godec at Statehouse on Wednesday.[photo/facebook.com/PSCU]

This week may be a long one in Kenya’s capital, Nairobi.