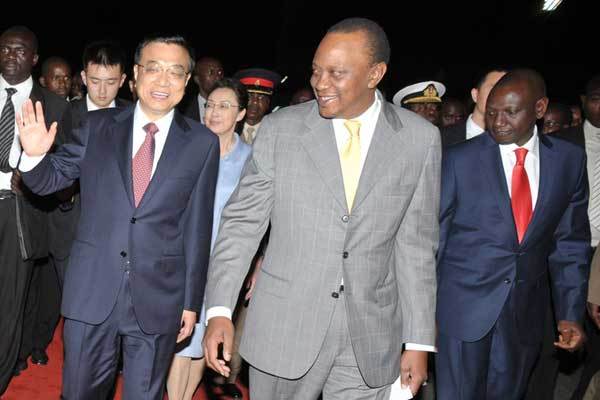 There is an attempt by the Jubilee government to make their supporters – majority of whom are massively ignorant of global politics and economics – to remain in that darkness and continue voting in that darkness. China is building our roads and rails not because they are our ‘friend’ – to warrant the kind of anti-western rhetoric still persistent in President Uhuru’s speeches – but because we are their ‘market’.

Friendship is about patriotism and nationhood. Market is about raw materials and profit, at worst, loss. You behave as if without us the West will collapse. You also reason as if China is the West’s grand adversary yet as it builds your ‘standard gauge’ railway which can still be blown up by Al-shabaab or uprooted in 2022 post-poll settlement by Luos – whichever comes first – it is also building a high speed rail to connect its capital Beijing through Siberia, across the Bering Strait to Alaska and down through Canada before reaching the mainland USA.

China is building your standard guage railway – a distance of less than 700Km. The Beijing-USA high-speed rail is 13,000Km; and includes an underwater link -the one headed to Alaska. Oh, while you yap and insult the West as you stare (look) at the East, just know that China is building another HIGH SPEED rail connecting Beijing to London via Paris and Berlin. Another High Speed rail China is building connects it to Germany via Iran and Turkey.

China is connecting the West more than it is connecting you. You are not even sure whether you want to be connected. You’ve never been out of your ‘province’. At best, you’ve been in two other provinces. A typical Jubilee supporter is a person less travelled, less exposed and highly tribalised.

A typical jubilee supporter must be kept in the dark, must be made fearful and hateful and hopeful of some ‘Africanised Africa’ while at the same time gasping for breath to live one more day. Tribal and poor. Angry, vengeful and pretentious. You are told to behave as people who own Kenya – tyranny of numbers – yet, we’ve seen, starkly, how helpless and hopeless and hapless you can die – deaths you don’t deserve; deaths you purchase – poor deaths.

The point am making is that jubilee supporters must wake up. Your condition is worse than us. Your situation is deteriorating. This was your government. This was your dream. And don’t tell us you are enjoying! Don’t pretend you are cool. If so you are on slumber. Wake up. When you wake up and begin making demands, we will join you. Remember, you have no choice. You either make demands or die.

In February we opposed your government taxing everything. They put tax on Senator Keg. We opposed. You did not join us. You said we were fighting your government. I will repeat it: You must make demands. You deserve better. Remember again, you got no choice. You either make demands or die. Brothers, it is one or the other, not none