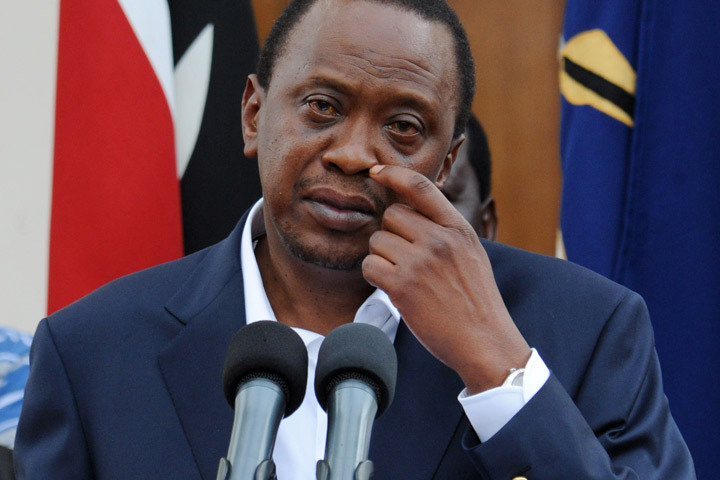 Recently when CORD leader James Orengo was summoned by the CID to record statements over Lamu land grabbing, the incident was peddled in the media for a whole week, with State House junior officials of the Presidentâ€™s press service, PSCU, relentlessly going out of their way, with a presser of their own, to malign the character of the former lands minister.

A historical land dispute that dates back to when Hon. Orengo was a student at Alliance was squarely blamed on him, with wild claims of how he benefited from the irregular land allocations. What became of it?

Jubilee government has in the past claimed it is viciously fighting land grabbing. But this is hot air and propaganda. In fact, land grabbing has been and is the elite pastime of President Uhuru regime.

So why did Uhuru regime come crashing on Orengo specifically and many other critical voices in the Kenyan opposition?

A critical look at the ‘containment’ strategy the Uhuru government is employing reveals a consistent application of propaganda tactics of a British PR firm, BTP Advisers, to run a failing regime.

My interest in PR and propaganda is purely academic. I am a student of public relations – the art and science of creating a ‘relationship’ between forces engaged in mutual endeavors.

The greatest irony of President Uhuru and his regime is its dependence on European expertise and personnel to manage the country even as he pretends that Kenya does not need ‘the West’.

He uses western (European) legal representatives in his Hague case. He borrows from the west (Eurobond) and retains the propaganda services of a western (British) public relations companies. When a western polling agency -Gallup poll – claimed that he was the third best performing African President, the whole western propaganda facade had reached its anti-climax. The worst is yet to come.

BTP Advisers, credited for the Jubilee 2013 campaigns, and retained by government for the long rough ride to 2017, is part of a chain of western Public Relations companies assisting several african governments – mostly despotic regimes – to socially manufacture both consent and legitimacy of citizens of such countries.

They are in Rwanda, in Gabon, in Angola, in Zimbabwe, in Cameroon, and, until Ouagadougou got fed up, western PR was the mainstay of Blaise Campore regime in Burkina Faso.

When successful, these PR companies shore up support for such regimes, ensuring their remain in power as long as business is flowing. Many of the CEOs of these top western companies are senior business partners of several African presidents.

This arrangement, however, come at a great cost to citizens of these nations. The funds allocated to these western propaganda agencies are enough to turn around critical sectors of those nations.

Governments which hire PR agencies often have one thing in common: their are illegitimate in their eyes of a big section of their citizenry. Either they came to power through coups, or through rigged elections.

The thing with political legitimacy is that it cannot be bought. Legitimacy is what makes elections such an important ingredient of representative democracy.

When Uhuru regime retained, even after the 2013 general elections, the services of BTP Advisers, it knew so well that it will be an illegitimate government borne out of a rigged election.

Ever since, BTP has done a commendable job, making this regime, and its head, the most positively ‘spinned’ institution and person in Kenya.

On ‘regime generated’ charges, the jubilee regime has hauled in court every critical opposition figure in Kenya. Even CORD leader Raila Odinga has a court case awaiting him in Kibera law courts!

While researching on BTP Advisers, I came across this ‘court strategy’. At its mundane form it seeks to injure the reputations of those it sends behind bars (even for a weekend) and turn the population against them. In a sense, this strategy takes away â€˜moral authorityâ€™ from those who oppose such regimes because their ‘past’, however clean and rich in struggle for a better country, has to be darkened and ‘bloodied’.

To be guilty in Kenya today you don’t need to be proven guilty by a competent court of law: you only need to be summoned by the police, or arrested. It extracts its sweetest juice when you are arraigned in court.

That’s why Orengo – a man who cancelled the largest number of irregularly allocated land title deeds, cleaned land ministry and collected for the exchequer over 1 billion shillings from the KANU era meagre millions – had to face ‘detectives’ over Lamu.

In attempts to manage ‘regime reptation’, BTP Advisers recommend to governments the ‘court strategy’ as the best neutraliser of regime critics.

Uhuru’s propaganda has seen the worst hold on Kenya’s mainstream media in a very long time. Even at his political lowest, President Mwai Kibaki did not ‘sweeten and, or scare’ the media as Uhuru regime does.

Every issue in Kenya today can be trivialised in the media so long its urgency does not augur well with the Jubilee regime.

The mainstream media in Kenya is a gate-keeper, with allegations of buy-offs of whole media editorial teams as well as several individual journalists.

On social media, it is estimated that there exists well over 800 ‘fake’ twitter account handles for the regime. The same can be said of Facebook, where government trolls and bullies are everywhere.

In Kenya, BTP Advisers have successfully created an illusion of â€˜service deliveryâ€™. Every ‘microscopic’ project is gigantically launched. Every launch adds to the fallacy of a ‘working digital regime’.

The social media propaganda strategy of Uhuru regime, which the government of Uzbekistan rejected, is summed up in the pettiness with which â€˜supportersâ€™ of the government â€“ who in reality are paid BTP propagandists â€“ always descend on facebook and twitter posts critical to Uhuru regime.

The strategy is to â€˜overwhelmâ€™ citizens with the â€˜good deedsâ€™ of their regime leaders. Non-events are turned into big and extended media news, running into days, if not weeks. Every time this is done, an â€˜opinion pollâ€™ is carried out â€“ in reality, the poll itself is cooked â€“ to further convince the population that the regime, or its leaders, are marvelously performing in their duties, even when reality is something different.

For mainstream media â€“ which gets its billions from government advertisements, upsetting that arrangement is out of question. Part of this government-media industrial complex, this media rendezvous with the government, is also fed in part by ethnicity.

Right now, the ethnic elite in the media and their counterparts in government are fraternal, not antagonistic.

In almost all media firms in Kenya, the Kikuyu-Kalenjin duopoly dominates the rest. The result is what we have now – a fourth arm of the jubilee regime. Add to the numerous sunday pyramid schemes called ‘evangelical churches’, and John Njue, and the compound becomes highly flammable.

For how long? I do not know.