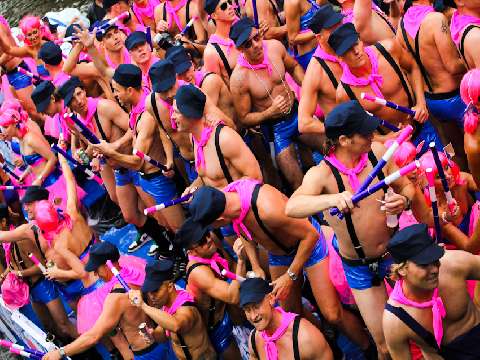 BY: Pete Jones and Mark Schenkel in Kampala for guardian.co.uk, Friday 7 September 2012 18.24 BST

The British producer of a play that highlights the difficulties of being gay in Uganda has been charged with a criminal offence after the production was staged despite a ban by regulators. The offence carries a sentence of two years in jail.

The Ugandan Media Council sent a letter to David Cecil, producer of The River and the Mountain, on 16 August saying it was considering whether to grant the play clearance to be performed.

“In the meantime,” read the letter, “this play is not to be staged in any theatre or public place in Uganda.” The play’s run at the National Theatre was cancelled but it was performed at two small venues in the capital Kampala.

“I was called in by the police and spoken to by several officers from the media offences department of the CID [Criminal Investigation Directorate],” said Cecil. “They said that by staging the play I have disobeyed the Media Council, which is a public authority. I’ve been charged with that offence and they are now considering whether to press on with the case. But I had only taken their letter to be advisory, not the law.”

“The offence of disobedience of lawful orders carries a maximum sentence of two years in prison,” said Cecil’s lawyer John Francis Onyango. “There is no option for a fine, so if convicted it would be a jail term. However I am confident we can win the case. They must conclusively establish that this was disobedience, rather than the chance that the letter was misunderstood.”

Ugandan ethics minister Simon Lokodo said the play was not granted clearance because “this play is justifying the promotion of homosexuality in Uganda, and Uganda does not accommodate homosexual causes. We will put pressure on anyone saying that this abomination [homosexuality] is acceptable.”