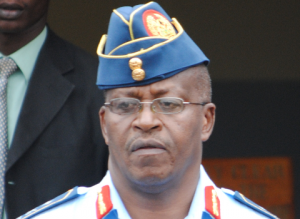 A Kenya Airforce pilot Brigadier Charles Mwai has been appointed the acting Director of Military Intelligence (DMI). Military sources said he will be in the position in acting capacity until December when the National Defence Council meets probably to approve him. This came after the new head of intelligence Major General (Rtd) Philip Kameru retired from the military. This follows his appointment as the Director General of National Intelligence Service from the Directorate of the Military Intelligence. Brig Mwai who hails from Nyeri, has been Maj-Gen Kameru’s deputy for long. A statement from the ministry of defence said Maj-Gen Kameru retired on Thursday.

“Following his successful parliamentary vetting and approval, we congratulate the outgoing Director of Military Intelligence who has retired from active military service, with effect from Thursday,” read part of a statement from Ministry of Defence. Informed sources say Brig Mwai and Kameru are close friends and working mates and this will boost their work. “They have both worked well in dealing with Al-Shabaab menace locally and in Somalia and their new roles will be a compliment,” said an informed source who asked not to be named.

A DMI specifically deals with military matters but can supplement other security agencies when needed. The National Defence Council is set to meet any time to choose the next Director of Military Intelligence to succeed Kameru and make other changes including the next commanders. Kameru was sworn in Thursday to succeed Maj-Gen Michael Gichangi who resigned last month for personal reasons. Kameru gained confidence with the Western powers when he worked with them during the multi-national operation to wipe out piracy in the Indian Ocean

NIS says the expanded democratic space, and the opportunities created by the county governments pose a fresh challenge to the service that covers security, political, economic and social issues. According to the law, NIS also vets various individuals seeking public positions, companies, citizenship, societies, and non-governmental organisations. Maj-Gen Kameru will now have to face several forces internally and externally unlike in the military where his line of duty mainly focused their operations. Gichangi has been instrumental in transformation of the service after the promulgation of the new constitution. Gichangi and his team have been able to tame a number of planned terror activities and those aware of his activities say his leadership had made the region to be safer at large.

He retires knowing he has left a safe country and firm service at large. In politics he worked well and carefully to ensure stability for the sake of the nation. Former heads of Kenya’s intelligence include James Kanyotu, William Kivuvani and Wilson Boinett. In Africa, NIS is viewed as one of the best outfits in terms of intelligence collection and action.