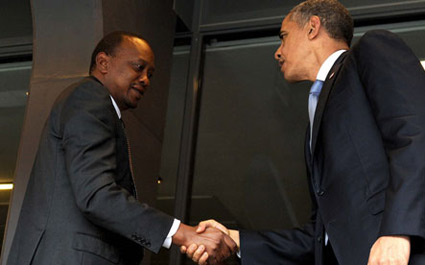 US President Obama will not meet individually with President Kenyatta or any of the 50 other African leaders expected to attend a White House summit next month, a State Department official said on Wednesday.

Choosing just a few of the visitors to hold one-to-one talks with Mr Obama would be â€œa very difficult decision,â€ Assistant Secretary of State for African Affairs Linda Thomas-Greenfield said in a teleconference with reporters.

Instead of holding selective discussions, Mr Obama intends to spend â€œa tremendous amount of quality timeâ€ with all the heads of state taking part in the August 6 summit, Ms Thomas-Greenfield added.

The US president plans to take part in each of the three summit sessions in addition to hosting an August 5 White House dinner for the African leaders and their spouses, she noted.

Foreign Minister Amina Mohamed said in an interview in Washington on Wednesday that the decision to forgo a Kenyatta-Obama meeting comes as no surprise.

â€œWe were consulted all along the way in the planningâ€ for the summit, Ms Mohamed told the Nation on the sidelines of a â€œDoing Business in Kenyaâ€ conference in the US capital city. â€œIt was a very inclusive approach.â€

She noted that President Kenyatta will be able to hold talks in Washington with many other African leaders while also focusing on three key elements in Kenya’s relationship with the US.

Enhanced cooperation with the US on security matters is Kenya’s top priority, Ms Mohamed said, adding, â€œWe want to take it to another level.â€

Attracting more American investment in Kenya will be another objective of Mr Kenyatta’s first visit to the US as head of state, the minister said.

Promoting increased trade and tourism will also be on Mr Kenyatta’s agenda prior to and following the August 6 summit, Ms Mohamed added.

The Kenyan leader will be holding talks with US business executives at an August 7 event being organised by the Corporate Council on Africa. President Kenyatta is also scheduled to give an address at a public forum that day.

In her remarks to reporters, Ms Thomas-Greenfield affirmed the United States’ â€œstrong partnershipâ€ with Kenya. She said the US has been helping the government in â€œfighting the terrorism that has really been quite prevalent in Kenya over the past few months.â€

â€œWe are looking at how we can be more pro-active in countering acts of terror,â€ the assistant secretary added.

The US has also raised concerns with the government in regard to the â€œround-upâ€ of Somalis in the aftermath of terror attacks in Kenya claimed by Somalia’s Al-Shabaab insurgency, Ms Thomas-Greenfield said.

â€œKenya has been extraordinarily hospitable as a host to refugees for many years,â€ she said, noting that human rights groups have identified some Somali detainees as refugees.

â€œWe did raise this with the Kenyans and are working with UNHCR [the United Nations High Commission for Refugees] and the government to ensure that those in Kenya with refugee status as able to maintain that status.â€