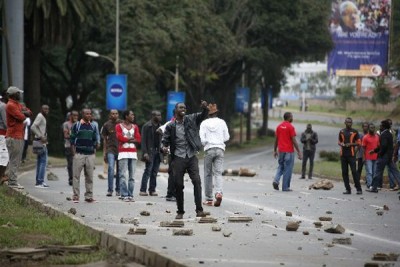 Learning has been paralysed in most public universities after students go on strike to protest delayed release of Helb loan.

University of Nairobi and Technical University students have taken to the streets where they have blocked major roads in the protest. Police have launched teargas to disperse the students.

However, Helb CEO Charles Ringera said HELB had released Sh1.8b on Thursday which he said the Ã‚ students will be able to access starting Friday. But the more than 56,938 government-sponsored first year students who started reporting last month will have to wait until November to get loans.

Police fired teargas to disperse the students who were hurling stones at them.

Through their leader, Babu Owino, the students had on Tuesday issued a strike notice for the release of the funds by Friday.

â€œWe expect the whole amount issued. Releasing part of the money will only make the problem worse,â€ Owino said.

Kenyatta University Students Association president Felix Lone attended the meeting. He said the conclusion was the release of Sh1.6 billion before the end of the week.