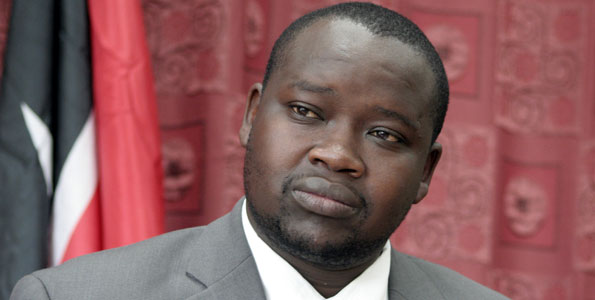 The four principal directors at Orange Democratic Movement (ODM) Secretariat have a short while ago addressed the media at their party headquarters and disowned their immediate boss the Executive Director Magerer Langâ€™at who last week was physically ejected by the partyâ€™s county assembly members from the CORD national executive committee meeting.

Magerer appeared on television show this morning to condemn his party and leadership declaring that he would never find it appropriate to support or vote for Raila Odinga at the elections.

Here is the full unedited statement from the media briefing:

We the staff of the National Secretariat of the Orange Democratic Movement (ODM) Party take great exception with the public outbursts by the partyâ€™s Executive Director Mr. Magerer Langâ€™at. We have noted with concern allegations and misrepresentation of facts attributed to Mr. Magerer in the print, electronic and social media networks which we find to be malicious and full of untruths.

After two weeks of silence, we, under the leadership of the Acting Executive Director, Mr. Joshua Kawino wish to state as follows;

1. Mr. Magerer Langâ€™at has no moral authority to talk about the party delegates list. He infact should take responsibility for the bungled party national elections and the events that unfolded on February 28th 2014. He unilaterally doctored the list of the delegates to the National Delegates Convention (NDC) without the knowledge of the party organs set up by the constitution. This mistake remains unforgivable.

2. Mr. Magerer was out-rightly partial in the execution of his mandate as the Executive Director by choosing to cause divisions amongst the staff paralyzing operations at Orange House.

3. ODM as a party has been audited or the last seven years with no evidence of any financial impropriety whatsoever and that the work-plan for the party has been duly approved as a statutory requirement. Therefore, it is disheartening to hear Mr. Magerer, as the CEO of Orange House who is privy to our work-plan claim that we are fighting over the control of Ksh. 87 Million whilst our entitlement is far much more and is not in contention.

4. We are equally demanding that Mr. Magerer urgently avails the details and whereabouts of the party vehicle KBL 219M which has been under his custody for over one year. Again, he should disclose the password to the partyâ€™s main computer which has vital party information and which he has declined to share with anyone except for his secretary.

5. During his tenure, Mr. Magerer engaged in inappropriate inter-personal relationships that compromised his moral authority as the boss of the Secretariat.

6. He has on numerous occasions engaged in direct insubordination contrary to clear instructions from the party leadership consequently causing confusion at the Secretariat. The latest incident being the party representation to the Political Parties Liaison Committee (PPLC) which he went against the partyâ€™s official position and declared himself the representative with total disregard to the direction given by the party leadership. This is in addition to his abstention from all Saba Saba and Okoa Kenya rallies instead choosing to attend meeting and fundraisers organized by our political opponents-a CEO employed by ODM!!!

We find Mr. Magererâ€™s outbursts as an attempt to cover-up his inadequacies in management and a ploy to play to the galleries by peddling lies which he can not substantiate.

It is telling that in the last two weeks he has been away from Orange House, the Secretariat has been peaceful, staff working in harmony and effective at planning and executing party activities. This is a clear manifest that Mr. Magerer is a blatant liar, deceitful, malicious, duplicitous, wicked, immoral, saboteur and a MOLE.

As the staff, we can only tell him to ACCEPT AND MOVE ON. The party will remain intact and stronger.