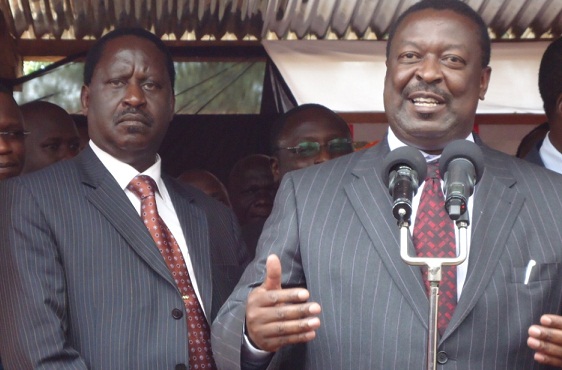 ANC boss Musalia Mudavadi has lashed out at the media for referring to Raila Odinga as the NASA leader claiming that he lost the title after he boycotted the October 26 repeat presidential election without consulting his co-principals.

In a hard hitting statement to newsrooms, the NASA co-principal further dared ODM to vacate its membership in the coalition accusing them of allegedly promoting what he termed as the Jubilee agenda.

“NASA doesn’t have the title of ‘NASA Leader’ in its salutations attributed to Hon. Raila Odinga by the media. The only honorary title shared by the party leaders of the four partner parties has been either NASA Principal or NASA Co-Principal,” said Mudavadi.

“NASA stated objective to constitute a democratic government and not dictatorship, ODM is in continued violation of the Political Parties Act.”

Mudavadi also urged ODM to vacate the minority leadership position in Parliament saying that since the party joined Jubilee which enjoys the majority position, ODM should therefore cede its claims on minority status.

“ODM cannot eat the cooperation steak and the same time hold onto minority entails. That’s called double-standards, greed and dishonesty, which are the operating manuals for Jubilee,” he added.

On the infamous handshake between President Uhuru Kenyatta and Mr Odinga, Mr Mudavadi distanced the coalition from the Harambee House agreement saying that it did not represent NASA’s stand but was rather a truce calling between two individuals to end hostilities.

Mudavadi has further accused ODM of turning against NASA affiliate parties and operationalising its affairs with Jubilee, something he says was a misinterpretation of the handshake by ODM to mean political cooperation between Jubilee and ODM.

“We at NASA interpret the handshake as a Jubilee ploy to split NASA and scuttle its stated inclusive and structured National Dialogue Agenda with connivance with our former partner,” said Mudavadi

The ANC leader has further blamed Odinga for the recent detaining and deportation of Miguna Miguna alleging that as the price of the handshake.

“The tribulations befalling the “nag shake” by victimising Miguna are therefore self-inflicted by the ODM leader,” said Mudavadi