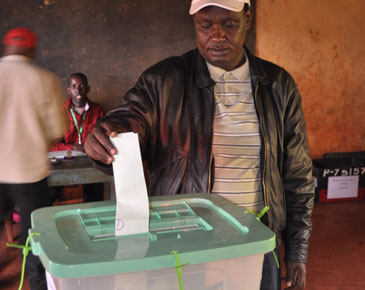 Ford People’s candidate Richard Tongi has been declared the Nyaribari Chache by-elections winner with 10,100 votes according to IEBC provisional results.

ODM’s Chris Bichage was a close second with 9,712 votes. The win by Richard Tong’i was not a surprise to many as he was the hot favourite in the March 4th general election, wide spread malpractice saw Hon Chris Bichage declared winner.

Nyaribari Chache is the home constituency of Simeon Nyachae the retired Ford People leader, the CIC chairman Charles Ayako Nyachae is said to be the secret hand behind Tongi and already rumours are doing rounds on the ground that he may seek a higher office when the right time comes.

The battle in the by-election was more between the current CORD leadership in the county against Charles Nyachae who many hope will seek to be the Kisii county governor or can lead an alliance at national level, with small tribes feeling shortchanged by the Jubilee regimeÂ  the young Nyachae may be a compromise candidate for e the loosing tribes outside the current tribal chieftains.

The by-election saw 9 candidates vie for the seat. The winner, Richard Tong’i had filed a petition in court challenging ODM’s candidate Bichage’s win. The court declared the seat vacant after it discovered that there were malpractises in the election.

The by-election was however marred with serious malpractises and five Jubilee agents have been charged in court over voter bribery, it wont be a surprise if any of the candidates who lost will fileÂ  a petition to challenge the results.