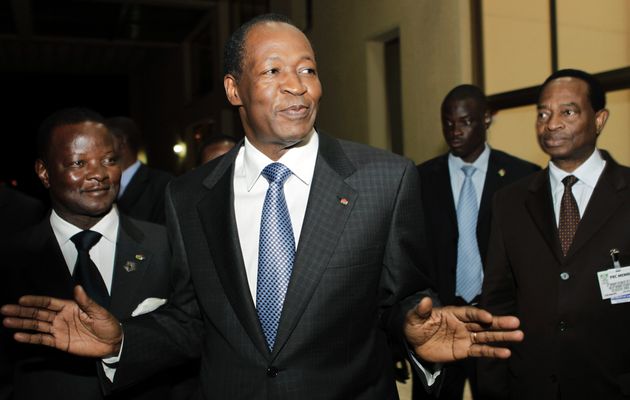 OUAGADOUGOU (Reuters) – Tens of thousands of people took to the streets of Burkina Faso on Friday to press President Blaise Compaore to step down, a day after the army dissolved parliament and announced a transitional government in the face of violent mass protests.

Compaore has ruled the landlocked West African country since he seized power in a 1987 coup but events on Thursday – when he appeared on the point of being toppled by a popular uprising – have left it unclear who is in charge.

Long a bastion of stability in the turbulent Sahel region, Burkina Faso’s crisis is being closely watched by military allies France and the United States, and by governments in the region where several long-standing rulers are approaching the end of their mandates amid rumbling of popular discontent.

Many protesters on the streets of the capital Ouagadougou said they wanted retired General Kouame Lougue, a popular former defence minister who was accused of trying to topple Blaise in 2004, to take charge on an interim basis amid frustration with the fractious political opposition.

“We want him out of power. He is not our president,” said Ouedrago Yakubo, amid the huge crowd that gathered at the main Place de la Nation and in front of the army headquarters.

The square, the size of a football stadium, and surrounding streets were packed with more protesters than any other day this week, according to a Reuters reporter – probably pushing the numbers into the hundreds of thousands.

People blew whistles and honked car horns but there was no sign of the confrontations with security forces that accompanied Thursday’s protests, in which at least three people were killed.

For several hours on Thursday, it seemed likely that Compaore’s 27-year rule was coming to an abrupt end as opposition leaders held talks with Lougue and military top brass, as tens of thousands of protests faced off with the presidential guard outside the palace

In a surprise announcement late on Thursday, however, Compaore said he would stay in office at the head of a transitional government until after elections. He also scrapped an unpopular plan to amend the constitution to allow him to seek election next year.

His announcement came after the head of the armed forces, General Honore Traore, said he would hold talks with all political parties to create an interim government to take the West African country to democratic elections within a year.

Those declarations did not satisfy opposition leaders and many on the streets, who demanded his immediate departure.

“The opposition remains firm that a prerequisite to any discussion on a transition is the unconditional departure of Mr. Blaise Compaore,” an opposition statement said on Friday. “The opposition calls on the people of Burkina Faso to maintain the pressure and systematically occupy all public places.”

“ARMY IS WITH US”

Scores of demonstrators were wounded in clashes with security forces on Thursday as demonstrators attacked symbols of Compaore’s long rule, looted and set fire to parliament and ransacked state television.

“It’s an extremely uncertain situation. African leaders from across the region are looking at this very closely,” said Philippe Hugon, an Africa expert at Paris-based foreign relations think-tank IRIS.

Burkina Faso is one of the world’s poorest nations but has positioned itself as a mediator in regional crises. It is also a key ally in Western operations against al Qaeda-linked groups in West Africa and one of the last African states to retain diplomatic relations with Taiwan.

The United States on Friday praised Compaore’s decision to withdraw the bill that would have allowed him to seek an additional term and his decision to pass power to a democratically elected government, State Department spokeswoman Jen Psaki said in a statement.

Regional West African bloc ECOWAS said on Thursday it would not accept any party seizing power through non-constitutional means in an apparent suggestion of diplomatic pressure to leave Compaore in place.

A delegation from the African Union, the United Nations and ECOWAS was due in Burkina Faso on Friday to hold talks with all parties.

Youth leaders told Reuters they already held talks at army headquarters with Traore on Friday on the shape of a future government and said they believed they had army support.

“They have given us reason to believe that the army is with us, but we must be patient,” said a rapper and youth leader with the Balai Citoyen group who goes by the stage-name “Smokey”.

The prospect of Compaore’s departure has raised fears of turbulence in nation that shares borders with six other countries at the heart of the turbulent Sahel. It was not clear what role the military would play in any transition and which opposition figure might emerge as a leader of the movement.

Youth leader, Tapsoba Mouni, said people wanted Lougue and mistrusted Traore, who he said would rule in Compaore’s place and follow his agenda.

“If nothing is done the country will be set on fire,” he said.