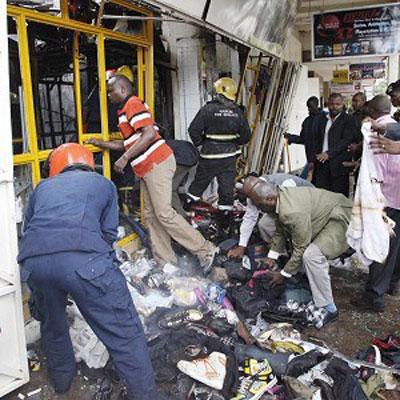 At least six people were Monday night killed and ten others wounded in twin blasts in California area in Eastleigh, Nairobi. The blasts happened when terrorists hurled explosives into a food kiosk and a bus stop, which were about 50 meters apart hitting crowds that were there, police said.

Witnesses said they heard a third blast in the area but police could not confirm. Those injured included women and had serious wounds when they were rushed to hospitals in the area when the blast happened along 11 Street of the crowded place.

Police said those who died were trapped in a food kiosk where they were for their supper. It is believed the attackers used grenades or Improvised Explosive Devices to launch the attacks. â€œI can see six bodies in the kiosk,â€ said a police officer who was there.

Emergency services were scrambled following the attacks that caught many unawares in the wake of increased such incidents. Hospitals were put on standby as police said many others ran away with injuries. See Also: UoN student found dead in hostel Nairobi police boss Benson Kibue said his officers who arrived at the scene first had seen at least six bodies in the kiosk nicknamed Mzalendo.

â€œWe have many casualties but we are yet to know the nature of explosive that was used in the attacks. We have people who have died,â€ said Kibue. A witness said he had seen a woman who usually sells vegetables in the area lying in a hospital bed. â€œI have seen at least six people in hospital including a woman who sells us vegetables. The others are boys I know,â€ said Lewis Mapengo.

Police rushed to the scene to secure it and announced the number of the dead may increase. The incident came a day after a suspected terrorist was killed in an explosion in Pangani area, Nairobi after an Improvised Explosive Devise he was assembling went off in his house.