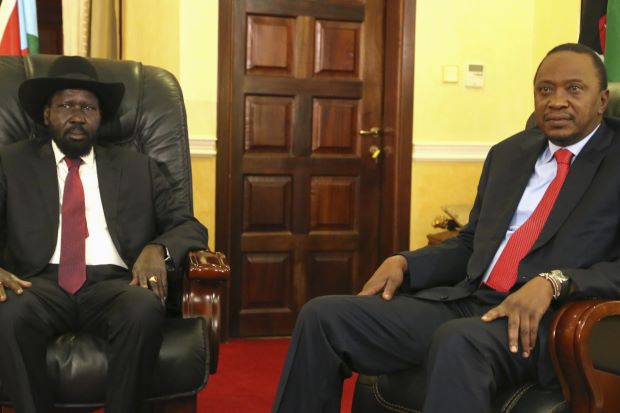 The special summit of IGAD heads of state whose meeting ended in Nairobi today declared support for embattled South Sudan President Salva Kiir in a move that was widely expected.

While the summit convened to seek ways to resolve the South Sudanese Crisis, the final resolution failed to directly provide a clear roadmap to an end to the violence in South Sudan. Instead, the resolution may embolden the rebels to fight away from the negotiating table.

The summit failed to call on the government of Juba to unconditionally release the political detainees, which the rebels, under Dr Riek Machar, have said is an integral part of the first stages of negotiating a peace settlement. Â Instead, President Uhuru, the East Africa Community Chair, only called for the ‘humane treatment’ of the prisoners.

“TheÂ detainees areÂ part of South Sudan leadership andÂ as such are partÂ ofÂ the solution. South Sudan’s legal system must process them as it should,while they are treated humanely and quickly enabled to be an integral part of the dialogue that will solve the underlying political problems that have brought us to this unfortunate crisis,” reads a resolution by IGAD.

“We Look forward to a transparent and inclusive constitutional review and development process that entrenches a democratic South Sudan.”

Instead, Kiir fired from government political opponents. That’s the where the South Sudanese crisis lies.

However, IGAD and EAC are pushing for some kind of power sharing and putting pressure on Dr Riek Machar and group to end all hostilities among other conditions. IGAD also directed its council of ministers to engage the government of South Sudan which means they have refused to see the rebelling side of the conflict as integral actors in the peace process.

Even more egregious is President Uhuru’s statement that IGAD will not unconstitutional overthrow of the government of South Sudan.