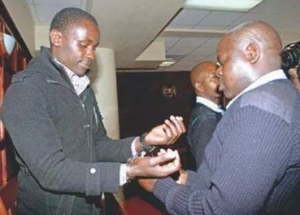 The CORD leadership stands in full solidarity with Dikembe Disembe which is why the coalition has retained Senior Counsel James Orengo as lead lawyer, whereby he will be guiding a pool of more than 10 lawyers not just for purposes of tomorrow’s High Court appearance seeking variance of bail terms but for the criminal trial as well.

2. Information reaching us is that the purpose behind Moses Kuria’s recent outbursts on social media leading to his arrest and prosecution is to set a precedence for dealing with bloggers sympathetic to our cause who have been gaining significant traction in social media since the March 2013 election. Moses Kuria never opposed his 2M bail terms because it was being paid from certain quarters. The idea was to set that as the standard and begin dealing with ODM supporters in order to silence them.

Therefore, if ODM pays the 2M, it WILL NOT end with Dikembe. Next they will come for Noah then Noah’s Sister then Noah’s Brother and set ridiculous bail terms for them all. CORD and ODM MUST battle the bail terms now so that DIKEMBE’s sacrifice will stand as testimony in future against such draconian order. I urge us all to look at the bigger picture so that Dikembe’s sacrifice is not in vain.

3. CORD leaders have committed to assisting with the bail terms once we succeed to bringing the amount down. But the war we should be fighting now is to bring the terms down so that if they come for you tomorrow, we won’t be looking for another 2M.

4. The Court sits at 9:00am tomorrow and the lawyers have assured us that they are on top of matters.