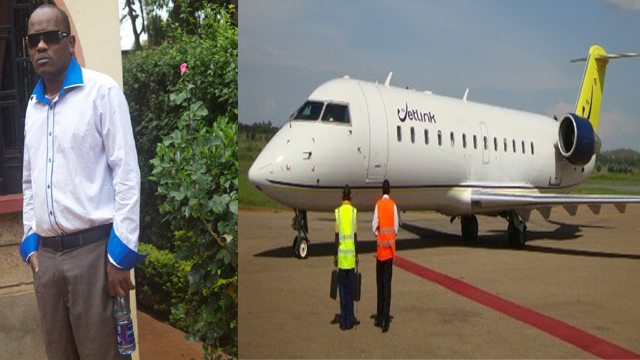 BY: Isaack Nyakundi and Jackal Bosire in Nairobi.

Blogger Dennis Itumbi has been charged by a Nairobi court with a count of intercepting data in a computer system without consent contrary to section 83(1) (b) (2) and publishing a depraving electronic material contrary to section 84D of the Kenya Communications (Amendment) Act No. 1 of 2009.

The prosecution comes months after blogger was arrested by CID officers for allegedly hacking International Criminal Court (ICC) website, an allegation he denied, the Police lacked evidence and could not possibly sustain a charge against him setting him free.

The offense is near similar to â€œhackingâ€ as he is charged of leaking emails that claimed Jetlink Airlines was flying unsafe planes, source told Kenya -Today.com.

According to the charge sheet, Itumbi stand accused of â€œintercepting data in a computer system without consentâ€ and â€œand publishing a depraving electronic materialâ€ on June 18 2012. The state complains that the said emails were a communication between Mathews Bwana and Elly Aluvaleâ€ on December 17, 2011.

The journalist pleaded not guilty, Nairobi Principal Magistrate Lucy Nyambura released him on a cash bail of Kshs. 100,000.
Sources close to Itumbi revealed that the airline had contacted him and threatened to file a civil charge if he did not apologize for leaking the emails. Itumbi apparently declined as any good journalist could do, an indication that he could be in possession of more damning information which could be of public interest as they touch on security.

Our in house attorney could not comment on the matter as itâ€™s a matter before the court.

Itumbi has attracted huge online following fueled by his in-depth investigative reports and real time updates on major breaking events in the country. If indeed the trial continues to full conclusion the air line risks the full disclosure of whatever could be in Itumbiâ€™s possession.

The sources added that Itumbi could be in possession of extremely damaging information on the airline and should the case proceed to full hearing, it can do untold damage to the airline.

The country has experienced a number of air accidents some which have been blamed on pilot error /poor judgment, weather conditions and mechanical condition of the aircrafts amon has been raised, the current Ngong crush investigation is a testimony to the such concerns..

In June, leaked Jetlink emails indicated that the airline flew planes that its engineers have declared unfit for the skies, posing danger to hundreds of passengers the firm ferries every day, a charge that Jetlink officials denied. Instead, claimed that the leaked emails were doctored.

Revealing of sources of the leaked emails to confirm authenticity will be central throughout the trial. â€œAt the centre of the charge is the question of whether journalists can reveal the source of their information.

The Kenya Union of Journalists Secretary General Jared Obuya notes that no court or any authority can compel a journalist to reveal sources. â€œProtection of the anonymity of sources is a cardinal principle of ethical journalism and for the media to play any watchdog role, confidentiality between journalists and their sources is critical,â€ said Mr Obuya in an interview with a local online news platform.

â€œProtection of sources is recognized in International law, by the UN, the Council Europe, the Organization of American States and the African Union. It is essential component in freedom of expression and is guaranteed by the constitution of Kenya, Chapter 33,â€ added the veteran journalist and trade unionist.

â€œSourcing is the lifeline of journalism. Without sources, there is no profession called journalists. The last that any worth journalist can die for is to protect his/her sources.â€ emphasized Mr. Obuya.