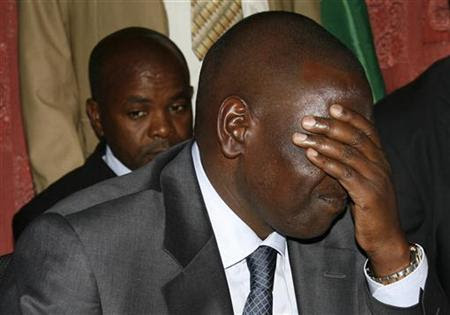 It been one and half year since tallying of presidential votes across the country commenced, of interest is one key event that many especially William Ruto will want to forget and also elase the same from the minds of Kenyans. This is how it was reported by agencies

Mudavadiâ€™s running mate,Jeremiah Kioni is alleged to have either â€œintentionallyâ€ forgot to vote for his Presidential candidate ,or had his vote spoilt or didnâ€™t turn up to vote at Ndururumo polling station where he as cast his vote. When votes were counted candidate Mudavadi got zero (0) votes!

Let it be known that hon Kioni had a family; wife,son and daughter that made a display during when Mudavadi unveiled him as runningmate. There were aslo party agents and associates from Kioni’s network- non of them voted for Mudavadi at least in this given polling station where hon Kioni casted his vote- Ndurumo polling centre !

Now with the latest information that MCAs in Kiambu county failed to approve Bernard Kipkemoi to be county chief officer for transport, it is becoming clear that Ruto will definitely be voted by all Kenyans whether at Ndururumo polling station or anywhere else…

Here is how one pundit captured it on Facebook:

Don’t joke with Ouru and NIS. They keep Ruto and URP busy insulting everyone and burning bridges, while Uhuru and TNA visit the country building bridges! When 2022 comes and it is Ruto’s turn, they will just say “wananchi ndio wamekataa, si sisi”.

Ruto is a village wag. Clueless, tactless, planless and whatever! He thinks the country hates ‘mt Kenya’ and will just elect him because of that. By 2022, he will have no supporter left!

Uhuru is a genius. Well, a genius who drinks like a fish, but still a genius! And Ruto is a whatever! Who depends on Murkomen and Duale. Fellow whatevers.