Like father like daughter/son, the children of senator Otieno Kajwang’ have this amazing smile just like the late senator. May God bless and guide them to overcome the challenges 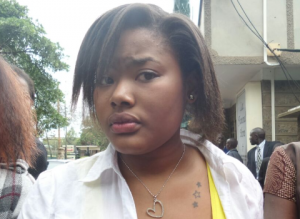 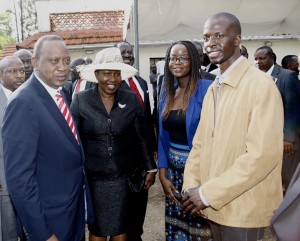 Meanwhile president Uhuru Kenyatta and Deputy President William Ruto on Thursday visited and condoled with the family of the late Senator Gerald Otiano Kajwang at his Runda home.

Kenyatta conveyed his condolences and assured the bereaved family of his support during this difficult time of grief.

â€œWe received the news of Senator Kajwangâ€™s death with overwhelming shock and sorrow. We are here to assure you of our support,â€ Kenyatta said.

Paying tribute to the late Senator, the President described him as a great leader who never feared to speak his mind.

The President said leaders should emulate Kajwangâ€™s legacy and work together in the best interest of the country.

â€œSenator Kajwang used to say that politics is not enmity. We should follow in his example,â€ the President said.

Deputy President Ruto said he knew the late Homa Bay legislator as a leader who stood tall in everything he did.

â€œSenator Kajwang was a great man. More than anything else, he believed in his vision, was proud of his constituency and his party but â€“ I must say â€“ he was very proud of his country. That is the legacy we want to emulate,â€ the Deputy President said.

Former Prime Minister Raila Odinga thanked President Kenyatta and Deputy President Ruto for visiting to console the bereaved family. He said ODM party and the whole CORD movement had lost one of their strongest advocates of democracy.

Senate Minority Leader Moses Wetangula recalled the moving contribution the late Kajwang made in Senate on the day he passed. He described Senator Kajwang as a person who was friendly to all.