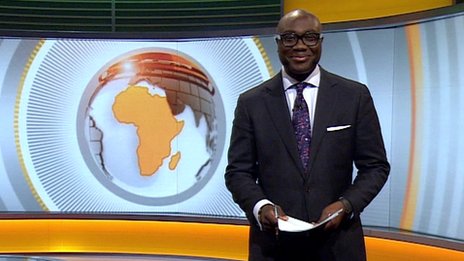 BBC TV presenter Komla Dumor has died suddenly at his home in London at the age of 41, it has been announced.

Ghana-born Dumor was a presenter for BBC World News and its Focus on Africa programme.

One of Ghana’s best-known journalists, he joined the BBC as a radio broadcaster in 2007 after a decade of journalism in Ghana.

“Komla’s many friends and colleagues across Africa and the world will be as devastated as we are by this shocking news,” Mr Horrocks said in a statement.

“The sympathies of all his colleagues at the BBC are with his family and friends.”
‘Sadness and gratitude’

He graduated with a BA in Sociology and Psychology from the University of Ghana, and a Masters in Public Administration from Harvard University.

He won the Ghana Journalist of the Year award in 2003 and joined the BBC four years later.

From then until 2009 he hosted Network Africa for BBC World Service radio, before joining The World Today programme.

He travelled across Africa, meeting the continent’s top entrepreneurs and reporting on the latest business trends around the continent.

He interviewed a number of high-profile guests including Bill Gates and Kofi Annan.

Last month, he covered the funeral of former South African President, Nelson Mandela, whom he described as “one of the greatest figures of modern history”.

He anchored live coverage of major events including the 2010 World Cup in South Africa, the funeral of Kim Jong-il, the release of Israeli soldier Gilad Shalit, the Norway shootings and the wedding of Prince William and Kate Middleton.

In his review of 2013, published last month, Dumor said the passing of Mandela was “one of the moments that will stay with me”.

“Covering the funeral for me will always be a special moment. I will look back on it with a sense of sadness. But also with gratitude. I feel lucky to have been a witness to that part of the Mandela story.”