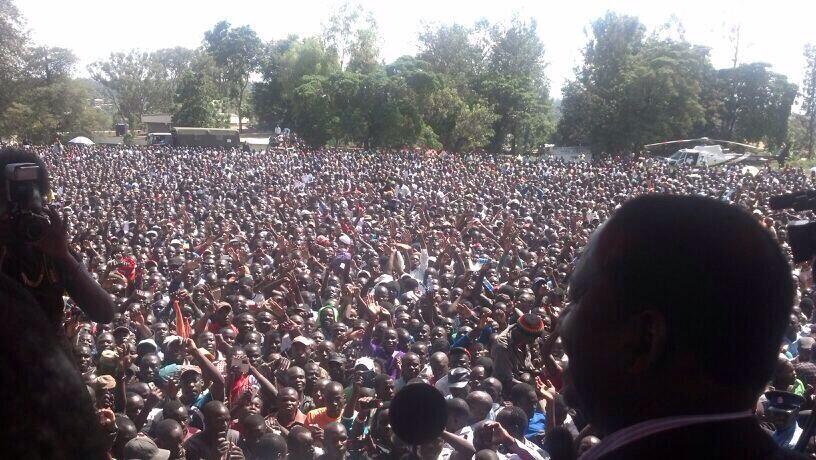 Cord leader Raila Odinga Friday told Kenyans to stay away from work on July 7, the day he has declared the beginning of pressure to force President Kenyatta to accede to demands for national dialogue.

He declared the day â€œa public holidayâ€ saying his rally would mark the beginning of a big change in Kenya.

Addressing the first of a series of rallies that Opposition leaders say are meant to force the government to agree to talks on insecurity, the Independent Electoral and Boundaries Commission (IEBC), the cost of living among others, in Migori, Mr Odinga asked all working Kenyans to stay indoors on that day.

â€œIt will be a day like no other and I ask all of you to stay away from your work places even as you give us moral support. We are moving forward to redeem our country,â€ said Mr Odinga.

â€œTime has come for the people of Kenya to use constitutional power to cause a major change in this country.

â€œClouds are quickly gathering and the faster President Uhuru Kenyatta moves to the negotiating table, the better for hisadministration. And he should do so quickly before we shave him without water,â€ he told a cheering crowd at the Migori Stadium.

He continued: â€œThe donkey is tired with the load and on Saba Saba Day, the animal will have to drop the load.â€

Mr Odinga said other rallies would be held in Mombasa, Kisii, Kakamega, Eldoret, Nakuru, Narok, Machakos, Garissa, Marsabit, Kisumu, with the final one planned for Nairobi on July 7.

In Mombasa, preparations for tomorrowâ€™s rally at Tononoka Grounds were going on.

Amid chants of â€œUhuru Must Go! Uhuru Must Go!â€ from the crowd, the Cord leader said while he was away, many bad things happened, including tribal-based appointments and Anglo Leasing payment.

â€œUhuru has the last chance to salvage his administration though national dialogue,â€ said Mr Odinga. He vowed not to compromise on insecurity, corruption, devolution, disbandment of the IEBC, and the cost of living which he said had affected Kenyaâ€™s socio-economic growth.

â€œWhen you see your neighbour being shaved, get ready or else you may be shaved without water,â€ Mr Odinga said, but would not elaborate on who the neighbour is.

â€œThe dialogue I am talking about is a must for them. I hope they will come to us before the D-Day.â€

His co-principal, Mr Moses Wetangula, said they would not allow the country to disintegrate in the hands of two communities.

â€œWe are going to liberate you on Saba Saba Day without failure. Jubilee leaders should rush to talk to us or else they may find nobody to talk to later.â€

â€œPresident Kenyatta and his Deputy William Ruto were political toddlers when we fought for the expanded democratic space and we are not going to allow them to strangle the benefits of our new Constitution,â€ said Mr Orengo.

Mr Muthama said the government was â€œfull of thieves who cannot be entrusted with public resourcesâ€.

â€œNow they have brought many Chinese nationals who are stealing our ivory at alarming levels,â€ he charged.

Dr Khalwale said they were more physically and psychologically prepared than ever before to fight for the rights of Kenyans.

Subaâ€™s John Mbadi said the Jubilee administration had been rejected by God and was â€œfaced with many misfortunesâ€. Former Vice-President Kalonzo Musyoka did not attend the rally as he was out of the country.

Mombasa County Commissioner Nelson Marwa assured those planning to attend the Tononoka rally that security had been beefed up.

â€œWe have an elaborate plan for security for the rally. People should not fear because we are at the top of things,â€ he said.