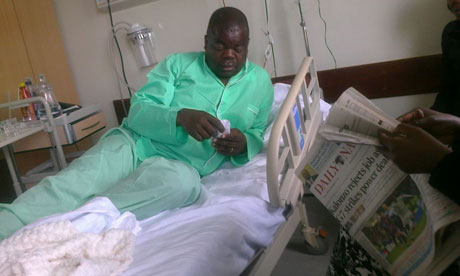 Omtatah recovering from his attack in a Nairobi hospital. Photograph: Courtesy of Okiya Omtatah Okoiti

The two men in dark suits caught up with Okiya Omtatah Okoiti as he walked in central Nairobi on a rainy November night. One man asked the Kenyan activist if he would drop a lawsuit alleging corruption in an election-related procurement process. Omtatah said no, and the two men beat him so badly he lost six teeth.

“I think they were sure they were going to kill me,” the executive director of Kenyans for Justice and Development (Kejude) Trust said on Tuesday, speaking by telephone from his home where he was recuperating after an operation to remove loose bone from his chin.

Human Rights Watch (HRW) and two other rights groups have called for a thorough investigation into “the violent attack on an outspoken critic of the government”. In September, Omtatah filed a lawsuit to demand accountability in the procurement of biometric voter registration (BVR) kits for March’s presidential election â€“ a ballot that has set Kenya on edge after early flashes of violence and fears that more could follow.

“This vicious attack was clearly meant not just to intimidate Omtatah but to seriously injure him â€“ and perhaps even to kill him,” said Leslie Lefkow, deputy Africa director at HRW. “The aim seems to be to stop his work on corruption in the procurement of BVR kits for the upcoming elections.”

Kenyans are due to vote for a new president, MPs and county governors on 4 March in the first election since a disputed poll in 2007 turned tribe against tribe in politically motivated tit-for-tat killings. More than 1,200 people were killed and hundreds of thousands were forced to flee their homes.

The race to find a replacement for President Mwai Kibaki is reigniting complex political and ethnic tensions, with jostling for votes already being blamed for deaths in the volatile coastal region and in the remote north. Many Kenyans vote on tribal lines, and candidates often exploit existing strains on the campaign trail. The stakes are even higher this time, as, under a new constitution, power is being devolved to the regions, meaning local politicians are even more determined to capture governorships in a country hoping to reap the financial benefits of recent oil and gas discoveries. The main candidates include Uhuru Kenyatta, a member of the dominant Kikuyu tribe and son of the Kenya’s first president Jomo Kenyatta, and the prime minister, Raila Odinga, a Luo and the losing candidate in the last poll.

Kenyatta is due to stand trial at the international criminal court in The Hague in April, just when a potential second round runoff is scheduled, for his alleged role in the 2007-08 violence. His closest ally, the former education minister William Ruto, is among three others also due to face the ICC judges. They all deny the charges.

The pre-election tensions, and sometimes blatant appeals to ethnicity, have focused attention on a political system widely condemned as corrupt and inefficient. Allegations of corruption in the BVR tender are just the latest in a long list of alleged improprieties by the ruling coalition.

Omtatah said he could not definitely link his attack to the lawsuit, but he had already received anonymous telephone calls urging him to drop the case, in which he is seeking a forensic audit of the procurement process. He said one of his attackers asked him in Kiswahili if he would withdraw the case. “That may be circumstantial,” said Omtatah, who has filed numerous cases against the government on topics ranging from MPs’ pay to the post-election violence to corruption allegations. “It is not foolproof.”

HRW quoted police as saying they could not begin an investigation while Omtatah was undergoing treatment. He told the Guardian there was no police inquiry.

Kenya’s Independent Electoral and Boundaries Commission (IEBC) introduced the biometric kits, which use specific facial features to identify voters, to improve the electoral process. Allegations of fraud triggered the violence after the 2007 ballot. HRW said the procurement of the kits “has been fraught with controversy, with allegations of bribery, influence-peddling and irregularities in this tendering process”.

In July, the IEBC’s tender committee resigned to protest external influences. In September, the tender was cancelled and a parliamentary inquiry launched. IEBC chairman Issack Hassan told parliament his commission had come “under immense pressure from external interests”. Tabitha Mutemi, communications manager at the IEBC, said in an email that there had been a lot of interference from external factors, and that the commission was not going to get away whichever firm won. “This question has been overtaken by events and the country has moved on,” she said. “There are 15,000 BVR kits in the country and voter registration is ongoing with only 20 days remaining to closure,” she wrote.

After the tender collapsed, the government took over the process, with the cost of the equipment rising from an initial estimate of around 4bn shillings (Â£29m) to a final bill of Sh9.6bn, HRW said. The kits, which were finally supplied by a French company, arrived in early November.

“My concern is that value for money must be guaranteed,” Omtatah said, alleging also that the BVR kits that were finally delivered were of inferior quality to those required in the initial tender. “There are so many irregularities in the contract â€¦ the IEBC must explain that,” he said.

Mwalimu Mati, of the anti-graft watchdog Mars Group Kenya, said the cost of the kits was a real matter of concern for Kenyans. “The IEBC is not doing a very good job of explaining this and this is what makes alarm bells ring over corruption,” he told the Guardian, adding that the financing of the purchase was also a worry. “Why is Kenya borrowing to finance its elections? We are not destitute â€¦ It is an issue, if not of corruption, (then) of mismanagement.”

Omtatah said he would not be put off by the assault. He said the court had given the IEBC until mid-December to disclose the full details of the BVR purchase. “[The attack] has made me more determined,” he said. “These people cannot think they own the country. I will be more careful about my security.”